Coping with Cybervictimization: The Role of Direct Confrontation and Resilience on Adolescent Wellbeing
Previous Article in Journal

The Distribution and Accessibility of Urban Parks in Beijing, China: Implications of Social Equity

As public service facilities, urban parks offer many benefits for daily life and social activities for residents. However, the accessibility of public parks to urban residents is often unevenly distributed in spaces that cannot be utilized fully. Here, we used the urban parks in Beijing, China as a case study and examined the relationship between urban park accessibility and population distribution at different administrative levels. Gini coefficient and Lorenz curve were used to evaluate the social equity of urban park accessibility, and the location quotient was used to identify the spatial difference between urban parks and resident population. The results of our study show that the urban park accessibility varies at district and subdistrict levels and that places with more urban parks usually have higher accessibility. Very importantly, the spatial equity is different from the social equity, a mismatch exists between the spatial distribution of urban parks and population, particularly for the elderly residents. These results generate valuable insights, as, in China and many developing countries, current urban public green space planning only uses the ratio of public green space to urban construction land and the per capita public green area. View Full-Text
Keywords: urban public facility; inequality; Gini coefficient; Lorenz curve urban public facility; inequality; Gini coefficient; Lorenz curve
►▼ Show Figures 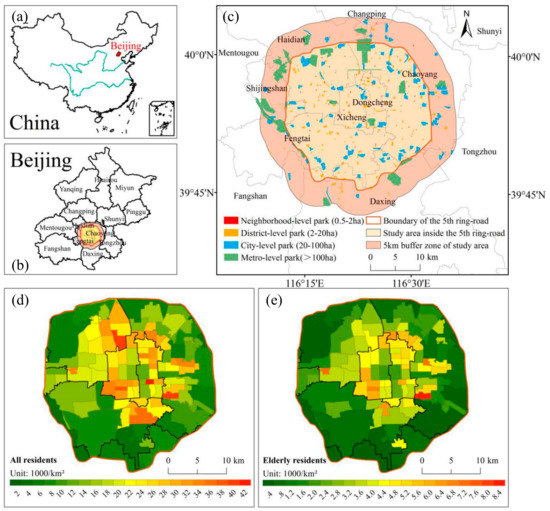