Serological and Molecular Investigation of Coxiella burnetii in Small Ruminants and Ticks in Punjab, Pakistan
Previous Article in Journal

Lyme disease, initially described as Lyme arthritis, was reported before nucleic-acid based detection technologies were available. The most widely used diagnostic tests for Lyme disease are based on the serologic detection of antibodies produced against antigens derived from a single strain of Borrelia burgdorferi. The poor diagnostic accuracy of serological tests early in the infection process has been noted most recently in the 2018 Report to Congress issued by the U.S. Department of Health and Human Services Tick-Borne Disease Working Group. Clinical Lyme disease may be caused by a diversity of borreliae, including those classified as relapsing fever species, in the United States and in Europe. It is widely accepted that antibiotic treatment of Lyme disease is most successful during this critical early stage of infection. While genomic sequencing is recognized as an irrefutable direct detection method for laboratory diagnosis of Lyme borreliosis, development of a molecular diagnostic tool for all clinical forms of borreliosis is challenging because a “core genome” shared by all pathogenic borreliae has not yet been identified. After a diligent search of the GenBank database, we identified two highly conserved segments of DNA sequence among the borrelial 16S rRNA genes. We further developed a pair of Borrelia genus-specific PCR primers for amplification of a segment of borrelial 16S rRNA gene as a “core genome” to be used as the template for routine Sanger sequencing-based metagenomic direct detection test. This study presented examples of base-calling DNA sequencing electropherograms routinely generated in a clinical diagnostic laboratory on DNA extracts of human blood specimens and ticks collected from human skin bites and from the environment. Since some of the tick samples tested were collected in Ireland, borrelial species or strains not known to exist in the United States were also detected by analysis of this 16S rRNA “core genome”. We recommend that hospital laboratories located in Lyme disease endemic areas begin to use a “core genome” sequencing test to routinely diagnose spirochetemia caused by various species of borreliae for timely management of patients at the early stage of infection. View Full-Text
Keywords: Lyme disease; core genome; DNA sequencing; borreliosis; relapsing fever borreliae; metagenomic diagnosis; Borrelia; genus-specific PCR primers; second PCR; direct detection; Sanger sequencing Lyme disease; core genome; DNA sequencing; borreliosis; relapsing fever borreliae; metagenomic diagnosis; Borrelia; genus-specific PCR primers; second PCR; direct detection; Sanger sequencing
►▼ Show Figures 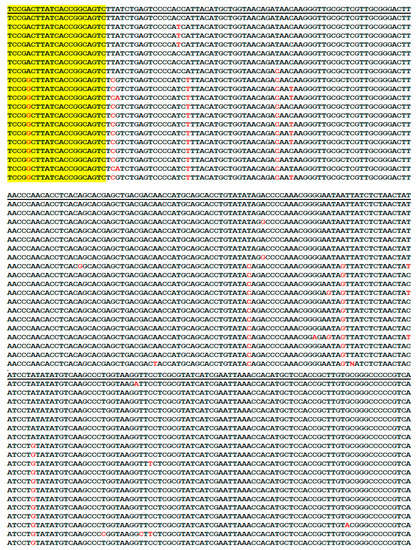