Changes of Ecosystem Service Value in a Coastal Zone of Zhejiang Province, China, during Rapid Urbanization
Next Article in Special Issue

Aspects of Additional Psychiatric Disorders in Severe Depression/Melancholia: A Comparison between Suicides and Controls and General Pattern
Previous Article in Special Issue

Background: The aim of our study was to assess utilization patterns of psychiatric services by asylum seekers. Methods: We included 119 adults who presented themselves at the University Emergency Department between 1 March 2012 and 1 January 2017 for psychiatric consultation. Descriptive data were compared with a control group of non-Swiss individuals with warranted residence permits using Mann-Whitney-U and chi square (χ2) tests. Results: Patients were mainly single, male, residing in reception centers, and presented themselves most frequently due to suicidal ideation. Almost 60% of the patients were assigned to inpatient treatments, with 28 involuntary cases. Compared to the control group, asylum seekers were younger and more often men (p < 0.001 for both). Further, they less often had family in Switzerland (χ2 = 9.91, p = 0.007). The proportion of patients coming in as walk-ins was significantly higher in the control group than in asylum seekers (χ2 = 37.0, p < 0.001). Asylum seekers were more frequently referred due to suicidal ideation and aggressive behavior than participants in the control group (χ2 = 80.07, p < 0.001). Diagnoses for asylum seekers infrequently included mood, as they often reported stress-related disorders (χ2 = 19.6, p = 0.021) and they were infrequently released home (χ2 = 9.19, p = 0.027). Conclusion: Asylum seekers more frequently demonstrated severe symptoms such as suicidal ideation and aggressive behavior and they were mainly treated as inpatients, potentially due to minimal social resources. View Full-Text
Keywords: asylum seekers; psychiatric emergency services; involuntary treatment; psychiatric hospitalization asylum seekers; psychiatric emergency services; involuntary treatment; psychiatric hospitalization
►▼ Show Figures 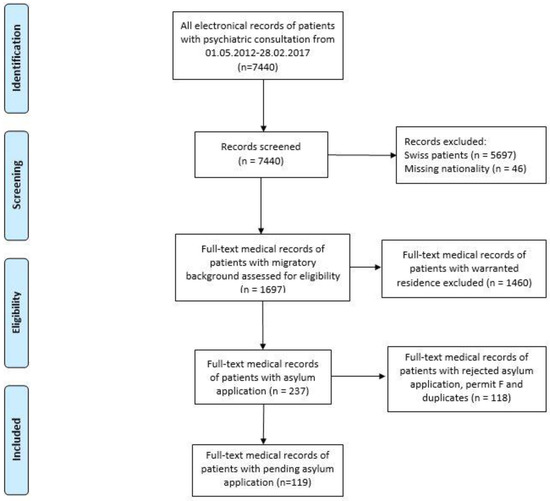