PCBs and PCDD/Fs in Bluefin Tuna: Occurrence and Dietary Intake

Previous studies have suggested that peptic ulcer disease (PUD) including stomach and duodenal ulcers might be associated with periodontitis (PD); however, no clear conclusions have been reached thus far. In this retrospective case-control study, we aimed to investigate the association between PUD and PD by using a large population-based dataset in Taiwan. A population-based retrospective case control study was conducted using the Longitudinal Health Insurance Database 2010 (LHID2010) derived from the National Health Insurance Research database (NHIRD) in Taiwan from 2000 to 2013. The case and control group were matched with gender, age, urbanization level, socioeconomic status, and Charlson comorbidity index (CCI) by using the propensity score method at a 1:1 ratio. A total of 177,240 cases and 177,240 control patients were included in this study, with an average age of 46.96 11.76 years. The risk of PUD for patients diagnosed with PD was 1.15-fold when compared with those without PD (OR, 1.15; 95% CI, 1.12–1.18). This population-based case control study demonstrated a significantly positive association between PUD and PD in Taiwan. View Full-Text
Keywords: periodontitis; peptic ulcer disease; gastric ulcer; duodenal ulcer; Helicobacter pylori periodontitis; peptic ulcer disease; gastric ulcer; duodenal ulcer; Helicobacter pylori
►▼ Show Figures 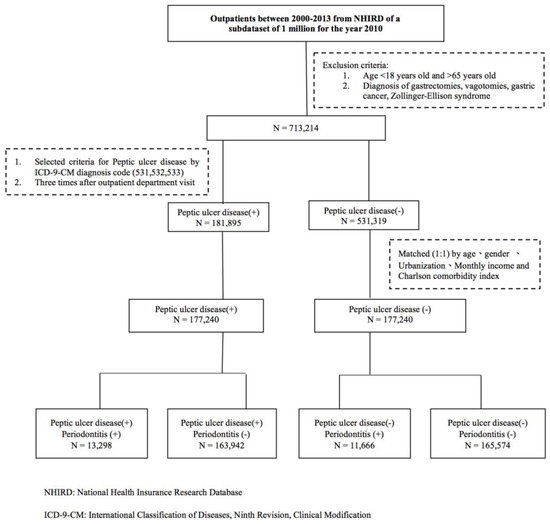