One of the consequences of climate change is the growing number of extreme weather events, including heat waves, which have substantial impacts on the health of populations. From a public health standpoint, it is vital to ensure that people can adapt to high heat, particularly in cities where heat islands abound. Identifying indicators to include in a parsimonious index would help better differentiate individuals who adapt well to heat from those who do not adapt as well. This study aimed at developing and validating a summer heat adaptation index for residents of the 10 largest cities in the province of Québec, Canada. A sample of 2000 adults in 2015 and 1030 adults in 2016 completed a telephone questionnaire addressing their adoption (or non-adoption) of behaviours recommended by public health agencies to protect themselves during periods of high temperature, and their perceptions of how high summer heat affects their mental and physical health. Item analysis, confirmatory factor analysis, multiple correspondence analysis, measurement invariance analyses and criterion-validity analyses were used to develop a 12-behaviour heat adaptation index for distinguishing between individuals who adapt well to high temperatures and those who do not adapt as well. The results indicated that the measurement and the factor structure of the index were invariant (equivalent) across the two independent samples of participants who completed the questionnaire at different times one year apart, an important prerequisite for unambiguous interpretation of index scores across groups and over time. The results also showed that individuals who perceived more adverse effects on their physical or mental health adopted more preventive behaviours during periods of high temperatures and humidity conditions compared to those who felt lesser or no effects. This study thus presents support for the validity of the index that could be used in future studies to monitor preventive behaviours adoption during summer periods of high temperature. View Full-Text
Keywords: adaptation index; climate change; heat wave; preventive health behaviours adaptation index; climate change; heat wave; preventive health behaviours
►▼ Show Figures 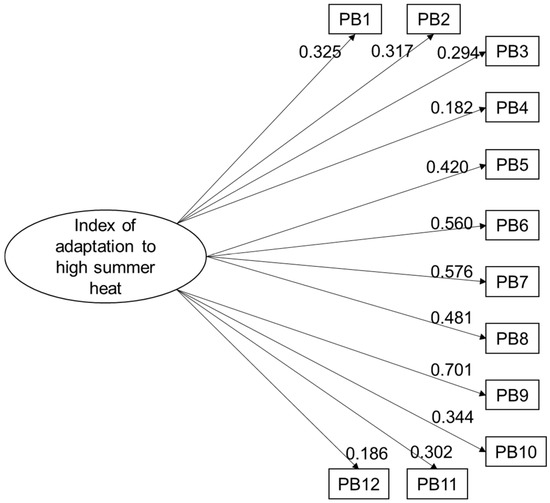