Transtheoretical Model of Change during Travel Behavior Interventions: An Integrative Review
Next Article in Special Issue

‘Hidden Habitus’: A Qualitative Study of Socio-Ecological Influences on Drinking Practices and Social Identity in Mid-Adolescence
Previous Article in Journal

Mapping Patterns and Trends in the Spatial Availability of Alcohol Using Low-Level Geographic Data: A Case Study in England 2003–2013

This study is to assess the effects of the 2008 economic crisis and a 2009 alcohol tax reduction on alcohol-related morbidity for men of different socioeconomic statuses in Taiwan. Admissions data for the period from 2007 to 2012 for men aged 24–59 years in 2007 was retrieved from the National Health Insurance Research Database. With stratification over three income levels, an interrupted time-series analysis examining the effects of the crisis and taxation reduction on incidence rates of hospitalization for alcohol-attributed diseases (AADs) was employed. The low income group showed a significant (p < 0.05) change in the rate of AAD-related hospitalizations in July 2008; specifically, an abrupt 7.11% increase that was then sustained for several months thereafter. In contrast, while the middle income group exhibited a significant 22.9% decline in the rate of AAD-related hospitalizations over the course of the crisis, that downward trend was gradual. The reduction of the alcohol tax resulted in increased rates of AADs among both the low and high income groups. The economic recession and the reduction of the alcohol tax resulted in an increased rate of AAD among low income men. View Full-Text
Keywords: alcohol-attributed disease; morbidity; economic recession; time-series; ARIMA alcohol-attributed disease; morbidity; economic recession; time-series; ARIMA
►▼ Show Figures 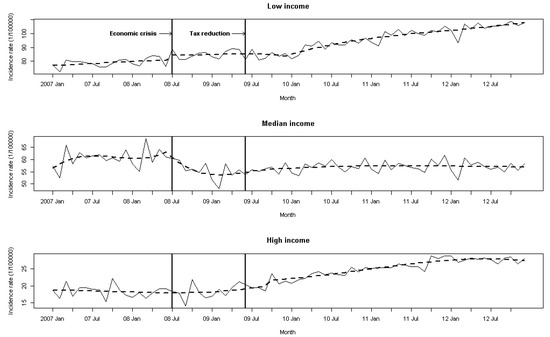 Liao, C.-M.; Lin, C.-M. The Effects of the Global Economic Recession and a Reduced Alcohol Tax on Hospitalizations Due to Alcohol-Attributed Diseases in Taiwan. Int. J. Environ. Res. Public Health 2017, 14, 580.


Liao C-M, Lin C-M. The Effects of the Global Economic Recession and a Reduced Alcohol Tax on Hospitalizations Due to Alcohol-Attributed Diseases in Taiwan. International Journal of Environmental Research and Public Health. 2017; 14(6):580.


Liao, Chen-Mao; Lin, Chih-Ming. 2017. "The Effects of the Global Economic Recession and a Reduced Alcohol Tax on Hospitalizations Due to Alcohol-Attributed Diseases in Taiwan." Int. J. Environ. Res. Public Health 14, no. 6: 580.