Mercury has a strong environmental impact since both its organic and inorganic forms are toxic, and it represents a pollutant of global concern. Liquid Hg is highly volatile and can be released during natural and anthropogenic processes in the hydrosphere, biosphere and atmosphere. In this study, the distribution of Gaseous Elemental Mercury (GEM) and the total and leached mercury concentrations on paint, plaster, roof tiles, concrete, metals, dust and wood structures were determined in the main buildings and structures of the former Hg-mining area of Abbadia San Salvatore (Siena, Central Italy). The mining complex (divided into seven units) covers a surface of about 65 ha and contains mining structures and managers’ and workers’ buildings. Nine surveys of GEM measurements were carried out from July 2011 to August 2015 for the buildings and structures located in Units 2, 3 and 6, the latter being the area where liquid mercury was produced. Measurements were also performed in February, April, July, September and December 2016 in the edifices and mining structures of Unit 6. GEM concentrations showed a strong variability in time and space mostly depending on ambient temperature and the operational activities that were carried out in each building. The Unit 2 surveys carried out in the hotter period (from June to September) showed GEM concentrations up to 27,500 ng·m−3, while in Unit 6, they were on average much higher, and occasionally, they saturated the GEM measurement device (>50,000 ng·m−3). Concentrations of total (in mg·kg−1) and leached (in μg·L−1) mercury measured in different building materials (up to 46,580 mg·kg−1 and 4470 mg·L−1, respectively) were highly variable, being related to the edifice or mining structure from which they were collected. The results obtained in this study are of relevant interest for operational cleanings to be carried out during reclamation activities. View Full-Text
Keywords: gaseous elemental mercury; Hg-mining areas; Abbadia San Salvatore; Central Italy; total and leached mercury; building material; remediation gaseous elemental mercury; Hg-mining areas; Abbadia San Salvatore; Central Italy; total and leached mercury; building material; remediation
►▼ Show Figures 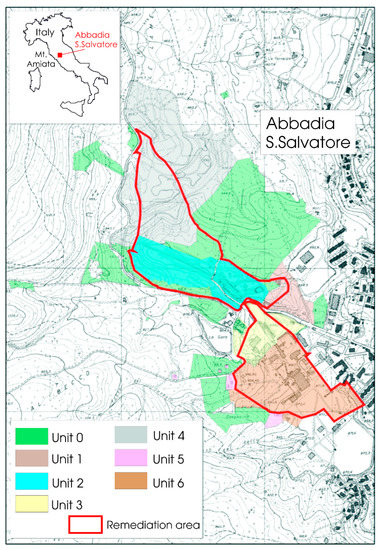