A Marine Bacterium, Bacillus sp. Isolated from the Sediment Samples of Algoa Bay in South Africa Produces a Polysaccharide-Bioflocculant

The Spatiotemporal Trend of City Parks in Mainland China between 1981 and 2014: Implications for the Promotion of Leisure Time Physical Activity and Planning

City parks, important environments built for physical activity, play critical roles in preventing chronic diseases and promoting public health. We used five commonly used park indicators to investigate the spatiotemporal trend of city parks in mainland China between 1981 and 2014 at three scales: national, provincial and city class. City parks in China increased significantly with a turning point occurring around the year 2000. Up until the end of 2014, there were 13,074 city parks totaling 367,962 ha with 0.29 parks per 10,000 residents, 8.26 m2 of park per capita and 2.00% of parkland as a percentage of urban area. However, there is still a large gap compared to the established American and Japanese city park systems, and only 5.4% of people aged above 20 access city parks for physical activity. The low number of parks per 10,000 residents brings up the issue of the accessibility to physical activity areas that public parks provide. The concern of spatial disparity, also apparent for all five city park indicators, differed strongly at provincial and city class scales. The southern and eastern coastal provinces of Guangdong, Fujian, Zhejiang and Shandong have abundant city park resources. At the scale of the city classes, mega-city II had the highest of the three ratio indicators and the large city class had the lowest. On one hand, the leading province Guangdong and its mega-cities Shenzhen and Dongguan had park indicators comparable to the United States and Japan. On the other hand, there were still five cities with no city parks and many cities with extremely low park indicators. In China, few cities have realized the importance of city parks for the promotion of leisure time physical activity. It is urgent that state and city park laws or guidelines are passed that can serve as baselines for planning a park system and determining a minimum standard for city parks with free, accessible and safe physical activity areas and sports facilities. View Full-Text
Keywords: city parks; physical activity; temporal trend; spatial disparity; planning; China city parks; physical activity; temporal trend; spatial disparity; planning; China
►▼ Show Figures 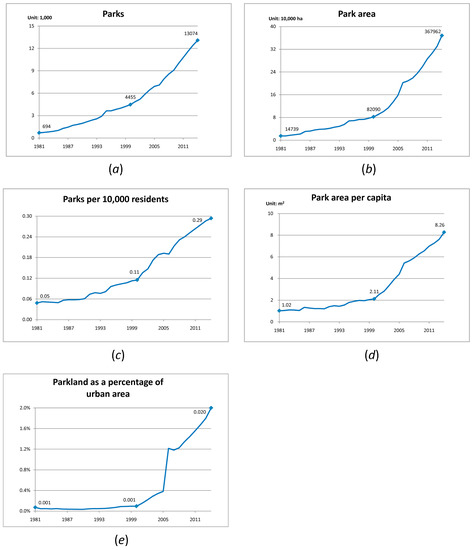 
Wang K, Liu J. The Spatiotemporal Trend of City Parks in Mainland China between 1981 and 2014: Implications for the Promotion of Leisure Time Physical Activity and Planning. International Journal of Environmental Research and Public Health. 2017; 14(10):1150.