:
The recycling of lost phosphorus (P) is important in sustainable development. In line with this objective, biochar adsorption is a promising method of P recovery. Therefore, our study investigates the efficiency and selectivity of magnesium modified corn biochar (Mg/biochar) in relation to P adsorption. It also examines the available P derived from postsorption Mg/biochar. Mg/biochar is rich in magnesium nanoparticles and organic functional groups, and it can adsorb 90% of the equilibrium amount of P within 30 min. The Mg/biochar P adsorption process is mainly controlled by chemical action. The maximum P adsorption amount of Mg/biochar is 239 mg/g. The Langmuir-Freundlich model fits the P adsorption isotherm best. Thermodynamics calculation shows ∆H > 0, ∆G < 0, ∆S > 0, and it demonstrates the P adsorption process is an endothermic, spontaneous, and increasingly disordered. The optimal pH is 9. The amounts of P adsorbed by Mg/B300, Mg/B450, and Mg/B600 from swine wastewater are lower than that adsorbed from synthetic P wastewater by 6.6%, 4.8%, and 4.2%, respectively. Mg/biochar is more resistant to pH and to the influence of coexisting ions than biochar. Finally, postsorption Mg/biochar can release P persistently. The P release equilibrium concentrations are ordered as follows: Mg/B600 > Mg/B450 > Mg/B300. The postsorption Mg/B300, Mg/B450, and Mg/B600 can release 3.3%, 3.9%, and 4.4% of the total adsorbed P, respectively, per interval time.
Keywords:
phosphorus; magnesium modified corn biochar; swine wastewater; nutrient recovery 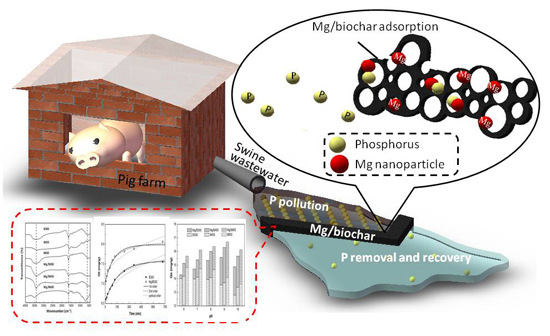 Intensive pig culture is currently an important part of the modern agricultural economy [1]. However, intensive pig culture plants usually generate a great deal of swine wastewater, which contain high concentrations of phosphorus (P) [2]. If this wastewater is not treated reasonably, it can facilitate mosquito breeding and the spread of bacteria in rural areas, especially if it is exposed to air. As a result, swine wastewater poses a major threat to public health. Environmentally, it does not only lead to the pollution of water eutrophication, but also wastes non-renewable resources [3]. Therefore, the P resource can be recycled from swine wastewater through innovative technology.
Many such technologies have been developed for various applications, including biological P uptake, chemical precipitation, electrolysis, and adsorption [2]. Biological P uptake utilizes polyphosphate-accumulating organisms to capture P in their cells. However, this method is limited by the lack of carbon sources and the difficulty of culturing pure bacteria [4]. Chemical precipitation has been hindered by its high chemical consumption, low recovery efficiency, and excessive production of chemical sludge [5]. Electrolysis is restricted by the little wastewater treatment capacity and the need to replace electrodes frequently [6,7]. However, recovering P from wastewater using adsorbents is advantageous over the other methods because of its high efficiency and low consumption [2].
Biochar is a new pollution adsorbent that has received a great deal of attention recently. Many researchers have utilized biochar adsorption for organic contaminants, such as sulfamethoxazole [8], phenanthrene [9], and triazine pesticides [10], and heavy metals, such as lead [11], cadmium [12], and mercury [9].
Thus, biochar adsorption can be used to recover P from wastewater for nutrient recycling. However, the poor efficiency and selectivity of P adsorption hampers the application of typical biochar. Previous research derived low P recovery ratios of only 73% [13] and 37% [14]. Moreover, the coexisting ions in wastewater, including Cl−, NO3−, and HCO3−, can reduce the recovery ratio of selective P adsorption by 4%, 11%, and 41%, respectively [13]. Previous studies demonstrated cation modified function adsorbents, such as lanthanum/aluminum-modified zeolite adsorbent [15] and Fe-treated artificial zeolite [16], can enhance the efficiency and selectivity of P recovery. Cation-modified biochar has been developed recently. Chen et al. [17] loaded FeCl2 and FeCl3 on orange peel biochar to adsorb 1.24 mg/g of P. Zhang et al. [18] loaded AlOOH on cottonwood biochar and adsorbed 135 mg/g of P.
The P from postsorption biochar is recycled as fertilizer to maximize nutrient resources in nutrient cycling. Hale et al. [14] reported that postsorption biochar could release 1.48 mg/g of reactive P, which was higher than the optimal P content required for plant growth (45–50 mg P/kg). However, the reuse of P as fertilizer may be affected by some of the cations that modify the biochar. Johnston and Richards [19] reported that the P in iron phosphates was hardly released and was unavailable for plant growth. Rittmann et al. [20] pointed out that aluminum was toxic to many plants and hardly released P as well. Therefore, the ease of P release and conduciveness to plant growth are important factors in the selection of cations for further biochar modification.
Magnesium, involved in the chlorophyll formation of plants, is considered as a suitable cation for P recovery [13,21]. Thus, magnesium modified corn biochar (Mg/biochar) is prepared in our study. It is then compared with biochar, in terms of characteristics, P adsorption efficiency, selectivity in swine wastewater, and the available P of postsorption Mg/biochar.

The pH influence analysis (Figure 5) demonstrated that the resistance of Mg/biochar to pH was stronger than that of biochar because of the embedded Mg nanoparticles. As pH increased from 6 to 10, the amount of P adsorbed by Mg/biochar increased and reached its maximum amount at pH 9 before decreasing, whereas the amount of P adsorbed by biochar was decreased slightly. 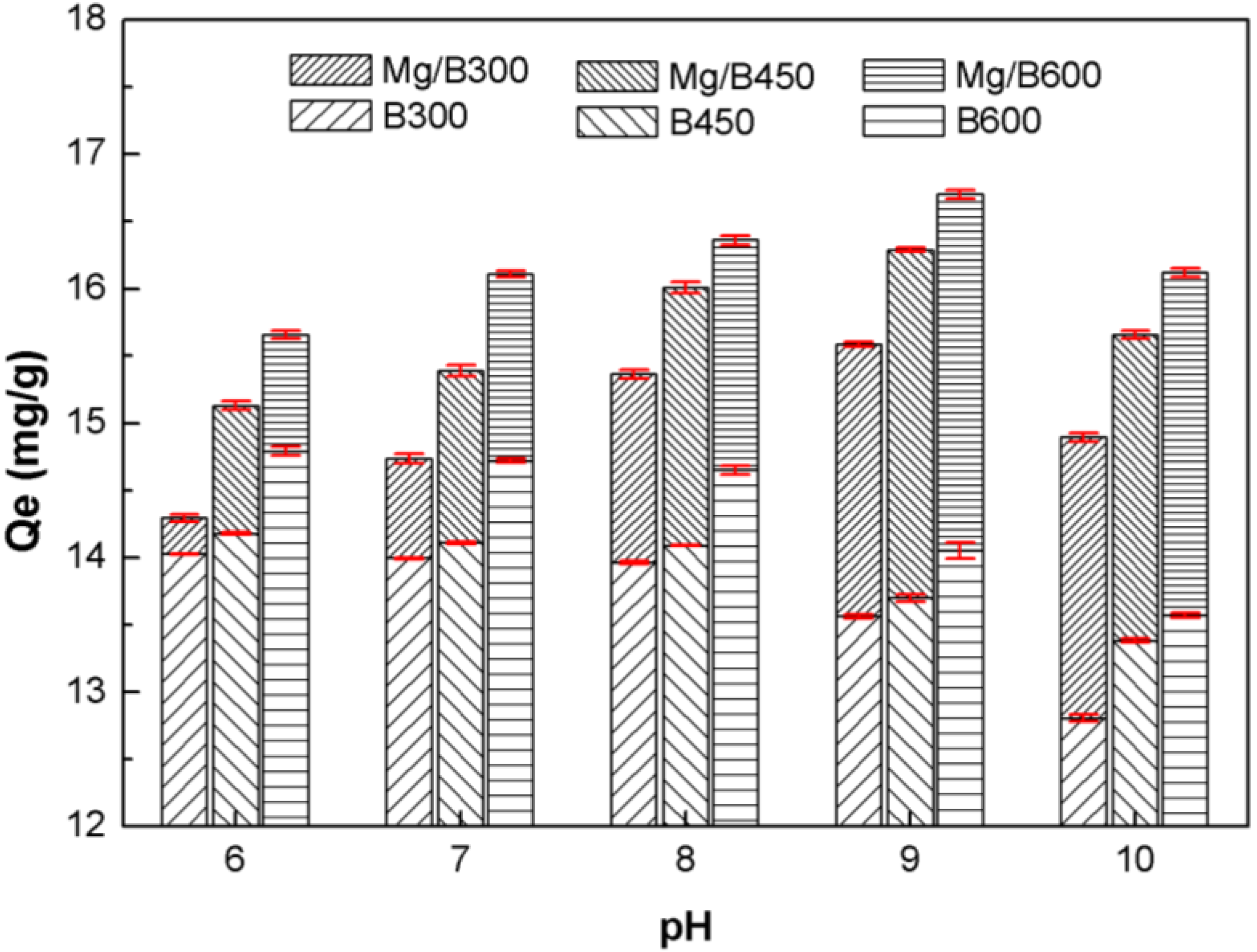 P is ternary acid whose ionization constants are 2.15, 7.20, and 12.33. When the pH is between 6 and 7.21, H2PO4− is the superior in solution form. The adsorption capability of biochar relied only on physical action and was related to the quantity and distribution of mesoporous structures, surface area, and organic functional groups. However, the adsorption capability of Mg/biochar depended on a combination of physical and chemical adsorption. The chemical action of the embedded magnesium nanoparticles on P increased as pH increased. However, an acid solution environment (pH < 6) is disadvantageous for an Mg-P reaction. When pH is between 7.21 and 9, HPO42− is the superior in solution form. The adsorption ability of Mg/biochar increased significantly as chemical action increased. However, the adsorption capability of biochar may decline further when additional adsorption sites are consumed as a result of polynuclear interactions [13]. Similar results were obtained with carbon-based adsorbents in studies of pH effect on P recovery [34]. Nonetheless, OH− competes with PO43− for the consumption of adsorption sites as pH increases from 9 to 10. As a result, the P adsorption amounts of Mg/biochar and biochar decreased further.
In conclusion, Mg/biochar shows affinity toward to HPO42−, whereas biochar shows affinity toward H2PO4−. The P adsorption properties of Mg/biochar are altered by the MgO nanoparticles. The optimal pH range of Mg/biochar for the selective adsorption of P is close to the pH range of swine wastewater, thus indicating that P is effectively adsorbed by Mg/biochar under the typical pH level of swine wastewater.

The negative interaction effects for P adsorption in swine wastewater may have a twofold origin. The first is the competitive effect of coexisting anions, including Cl−, NO3−, and so on. Single coexisting ions, such as NO3− (0.01M) and HCO3− (0.01 M), could reduce the P removal ratio through biochar adsorption by 11.7% and 41.4%, respectively [13,21]. The mixture of competing compounds can also limit the amount of P adsorbed by biochar by approximately 60% [21]. The second is the co-precipitation effect of coexisting ions on the surface of Mg/biochar and biochar, such as struvite, CaHPO4, MgHCO3, and so on, which occupy adsorption sites and block the mesopores. The dominant factor in the adsorption process should be identified in future studies. Nonetheless, the results obtained in the present study were better than other results [13,21]. It indicated that the chemical action of the magnesium nanoparticles in Mg/biochar could enhance the selective adsorption of P and limit the negative interaction effects of the coexisting ions in swine wastewater. Liu et al. [35] applied cation-loaded material, hydroxyl–iron–lanthanum doped activated carbon fiber, to adsorb P and hindered the negative effects on P adsorption. These results were close to those of the present studies.
Moreover, the influence of coexisting ions on P adsorption decreased with the increase in the pyrogenation temperatures of Mg/biochar and biochar. As a result, physical action was enhanced and resistance to the influence of coexisting ions was strengthened. 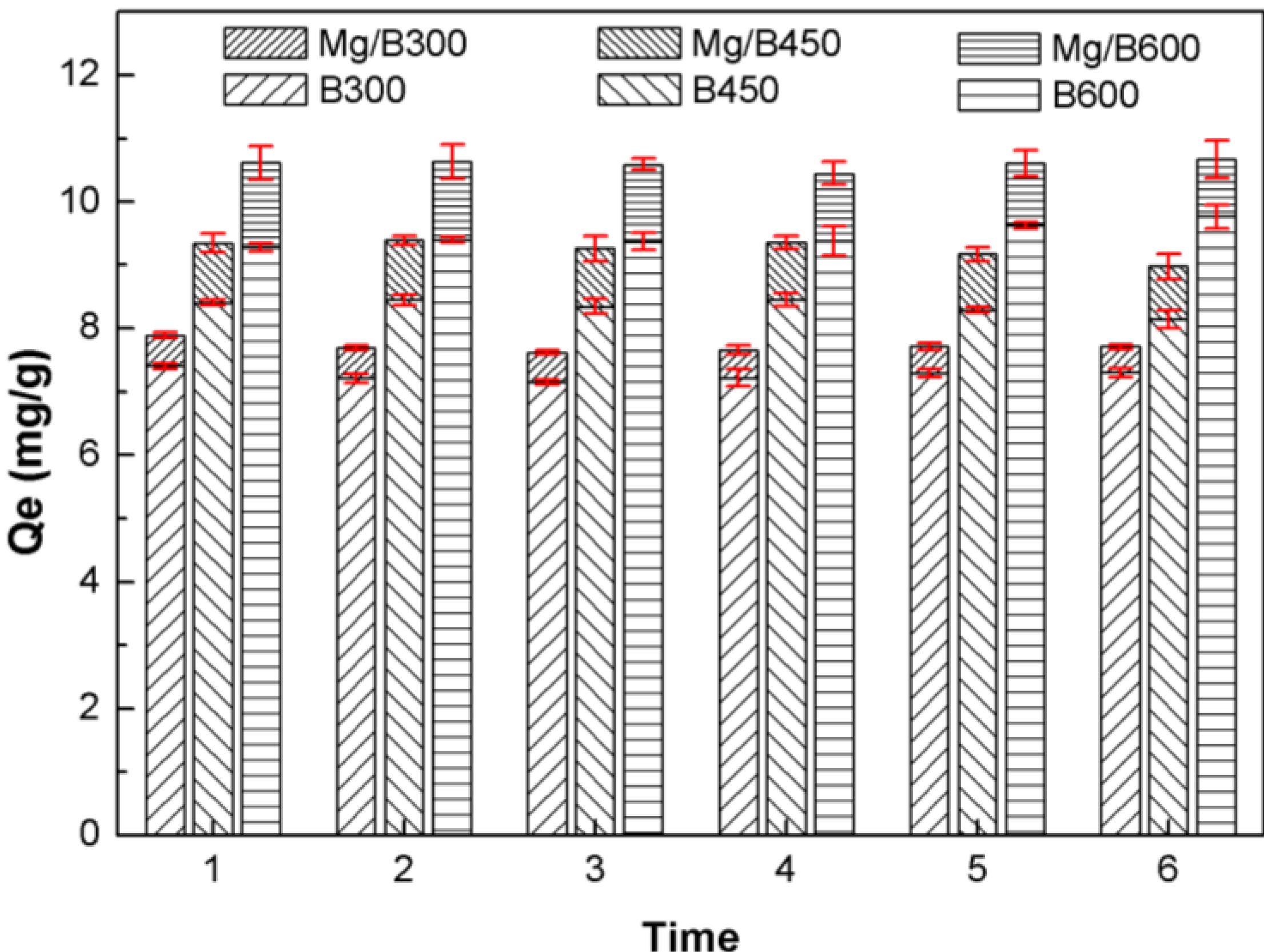 Figure 7 indicates that postsorption Mg/biochar, as with postsorption biochar, could gradually release P in citric acid DI. Thus, the embedded magnesium nanoparticles could not affect the P release of postsorption Mg/biochar in acid soil solution significantly. The pseudo second-order kinetic equation was used to describe the release process of P into extraction solution by postsorption Mg/biochar and postsorption biochar as follows: where Ct (mg/L) represents P concentration at t; Ce (mg/L) denotes P concentration at release equilibrium; and, kds (L·mg−1·h−1) indicates the kinetic constant of second-order equation. The P release processes of Mg/biochar and biochar fit the pseudo second-order kinetic model well. Moreover, the P release equilibrium concentrations were ordered as Mg/B600 > Mg/B450 > Mg/B300 and B600 > B450 > B300, respectively. This sequence can be attributed to the total amounts of adsorbed P, which are ordered as Mg/B600 > Mg/B450 > Mg/B300 and B600 > B450 > B300.
The interval extraction experiment result (Figure 8) suggests that postsorption Mg/biochar, as same as postsorption biochar, could persistently release P when the fresh citric acid DI was replaced, although the amount of P released was slight when the extraction solution reached equilibrium in the continuous extraction experiment. Mg/B300, Mg/B450, and Mg/B600 could release 3.3%, 3.9%, and 4.4% of total adsorbed P per time interval, whereas B300, B450, and B600 could release 3.6%, 4.1%, and 4.2% of total adsorbed P per time interval. This result confirms that postsorption Mg/biochar could persistently release P gradually for use as slow-release fertilizer. The results obtained in our research are similar to others reported results [21].