Marine-derived fungi are a significant source of pharmacologically active metabolites with interesting structural properties, especially terpenoids with biological and chemical diversity. In the past five years, there has been a tremendous increase in the rate of new terpenoids from marine-derived fungi being discovered. In this updated review, we examine the chemical structures and bioactive properties of new terpenes from marine-derived fungi, and the biodiversity of these fungi from 2015 to 2019. A total of 140 research papers describing 471 new terpenoids of six groups (monoterpenes, sesquiterpenes, diterpenes, sesterterpenes, triterpenes, and meroterpenes) from 133 marine fungal strains belonging to 34 genera were included. Among them, sesquiterpenes, meroterpenes, and diterpenes comprise the largest proportions of terpenes, and the fungi genera of Penicillium, Aspergillus, and Trichoderma are the dominant producers of terpenoids. The majority of the marine-derived fungi are isolated from live marine matter: marine animals and aquatic plants (including mangrove plants and algae). Moreover, many terpenoids display various bioactivities, including cytotoxicity, antibacterial activity, lethal toxicity, anti-inflammatory activity, enzyme inhibitor activity, etc. In our opinion, the chemical diversity and biological activities of these novel terpenoids will provide medical and chemical researchers with a plenty variety of promising lead compounds for the development of marine drugs. View Full-Text
Keywords: terpenoid; biological activity; chemical diversity; marine natural product; marine fungi terpenoid; biological activity; chemical diversity; marine natural product; marine fungi
►▼ Show Figures 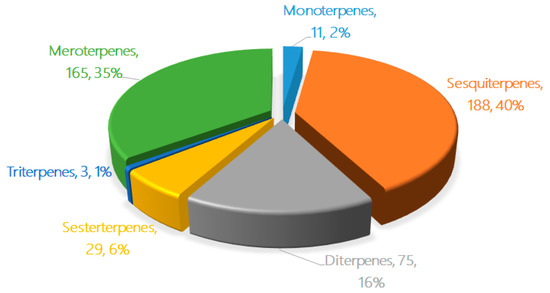