As part of our continuing efforts to discover new bioactive compounds from microbial sources, a reinvestigation of extracts of scaled-up cultures of the marine-derived Streptomyces sp. strain CA-271078 resulted in the isolation and structural elucidation of four new napyradiomycins (1–3, 5). The known napyradiomycin SC (4), whose structural details had not been previously described in detail, and another ten related known compounds (6–15). The structures of the new napyradiomycins were characterized by HRMS and 1D- and 2D-NMR spectroscopies and their relative configurations were established through a combination of molecular modelling with nOe and coupling constants NMR analysis. The absolute configuration of each compound is also proposed based on biosynthetic arguments and the comparison of specific rotation data with those of related compounds. Among the new compounds, 1 was determined to be the first non-halogenated member of napyradiomycin A series containing a functionalized prenyl side chain, while 2–4 harbor in their structures the characteristic chloro-cyclohexane ring of the napyradiomycin B series. Remarkably, compound 5 displays an unprecedented 14-membered cyclic ether ring between the prenyl side chain and the chromophore, thus representing the first member of a new class of napyradiomycins that we have designated as napyradiomycin D1. Anti-infective and cytotoxic properties for all isolated compounds were evaluated against a set of pathogenic microorganisms and the HepG2 cell line, respectively. Among the new compounds, napyradiomycin D1 exhibited significant growth-inhibitory activity against methicillin-resistant Staphylococcus aureus, Mycobacterium tuberculosis, and HepG2. View Full-Text
Keywords: napyradiomycins; marine actinomycetes; structural elucidation; antimicrobial activity; cytotoxicity napyradiomycins; marine actinomycetes; structural elucidation; antimicrobial activity; cytotoxicity
►▼ Show Figures 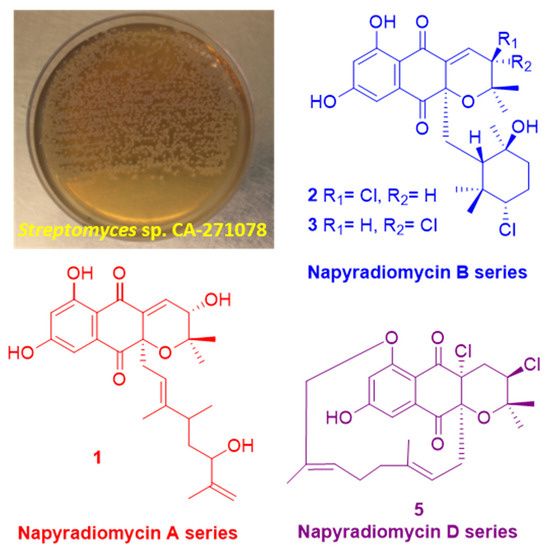