Keratan sulfate (KS) represents an important family of glycosaminoglycans that are critical in diverse physiological processes. Recently, accumulating evidence has provided a wealth of information on the bioactivity of KS, which established it as an attractive candidate for drug development. However, although KS has been widely explored, less attention has been given to its effect on gut microbiota. Therefore, given that gut microbiota plays a pivotal role in health homeostasis and disease pathogenesis, we investigated here in detail the effect of KS on gut microbiota by high-throughput sequencing. As revealed by heatmap and principal component analysis, the mice gut microbiota was readily altered at different taxonomic levels by intake of low (8 mg/kg) and high dosage (40 mg/kg) of KS. Interestingly, KS exerted a differing effect on male and female microbiota. Specifically, KS induced a much more drastic increase in the abundance of Lactobacillus spp. in female (sixteen-fold) versus male mice (two-fold). In addition, combined with alterations in gut microbiota, KS also significantly reduced body weight while maintaining normal gut homeostasis. Altogether, we first demonstrated a sex-dependent effect of KS on gut microbiota and highlighted that it may be used as a novel prebiotic for disease management. View Full-Text
Keywords: keratan sulfate; gut microbiota; modulation; Lactobacillus spp.; shark cartilage keratan sulfate; gut microbiota; modulation; Lactobacillus spp.; shark cartilage
►▼ Show Figures 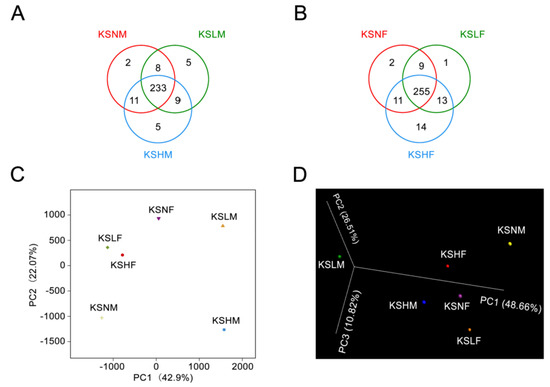