Background and Objectives: The high prevalence of lumbar spinal stenosis (LSS) and its negative impact on quality of life in the elderly is well known. However, the longitudinal time course of LSS symptoms remains unclear. The purpose of this study was to clarify the longitudinal time course and associated factors of LSS symptoms over a period of six years in a community. Materials and Methods: This study was conducted with data prospectively collected in 2004 and 2010 under a retrospective design. In 2004, 1578 subjects (age range: 40 to 79 years) were interviewed on LSS symptoms using a specially designed and validated questionnaire. In 2010, a follow-up study was performed by mail, to which 789 subjects of the 2004 study population responded. Considering that the presence of osteoarthritis (OA) of the knee or hip may influence the participants’ answers in the questionnaire, analysis was performed in all 789 subjects with and 513 subjects without either knee or hip OA. Changes in LSS symptoms between the initial and the 6-year survey were investigated. Multiple logistic regression analysis was used for detecting the risk factors for LSS symptom presence at the six-year follow-up. Results: 1. At the six-year follow-up, more than half of the subjects who showed LSS symptoms at the initial analysis became LSS-negative, and 12–15% of those who were LSS-negative became LSS-positive. 2. From the multiple logistic regression analysis, a lower Roland-Morris Disability Questionnaire (RDQ) score and a positive LSS symptom at the initial analysis were detected as predictive factors of the presence of LSS symptoms at the six-year follow-up in the total number of subjects, as well as just in those who did not have either knee or hip OA. Conclusions: More than half of the subjects who were LSS-positive at their initial assessment still experienced improvement in their symptoms even after 6 years. This means that both LSS symptoms and their time course vary from person to person. Predictive factors for the presence of LSS symptoms during the six-year follow-up period were RDQ score and positive LSS symptoms. View Full-Text
Keywords: lumbar spinal stenosis; epidemiology; natural history; quality of life; predictive factors; comorbidities lumbar spinal stenosis; epidemiology; natural history; quality of life; predictive factors; comorbidities
►▼ Show Figures 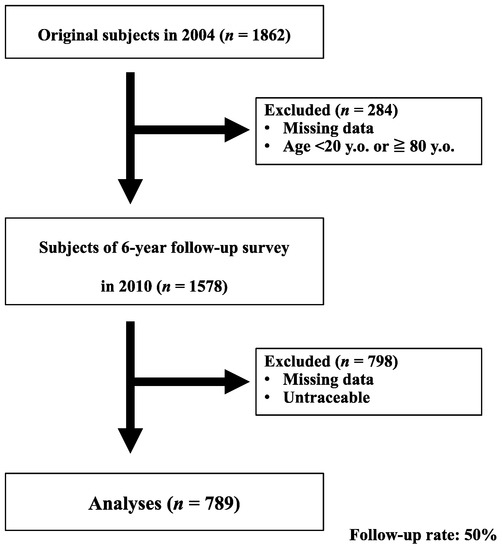