Evaluation of New Antimicrobial Agents Based on tris(1H-Indol-3-yl)methylium Salts: Activity, Toxicity, Suppression of Experimental Sepsis in Mice
Next Article in Special Issue

Will Cannabigerol Trigger Neuroregeneration after a Spinal Cord Injury? An In Vitro Answer from NSC-34 Scratch-Injured Cells Transcriptome

Spinal cord injury affects the lives of millions of people around the world, often causing disability and, in unfortunate circumstances, death. Rehabilitation can partly improve outcomes and only a small percentage of patients, typically the least injured, can hope to return to normal living conditions. Cannabis sativa is gaining more and more interest in recent years, even though its beneficial properties have been known for thousands of years. Cannabigerol (CBG), extracted from C. sativa, is defined as the “mother of all cannabinoids” and its properties range from anti-inflammatory to antioxidant and neuroprotection. Using NSC-34 cells to model spinal cord injury in vitro, our work evaluated the properties of CBG treatments in motor neuron regeneration. While pre-treatment can modulate oxidative stress and increase antioxidant enzyme genes, such as Tnx1, decreasing Nos1 post-treatment seems to induce regeneration genes by triggering different pathways, such as Gap43 via p53 acetylation by Ep300 and Ddit3 and Xbp1 via Bdnf signaling, along with cytoskeletal remodeling signaling genes Nrp1 and Map1b. Our results indicate CBG as a phytocompound worth further investigation in the field of neuronal regeneration. View Full-Text
Keywords: CBG; neuronal injury; natural products; NSC-34; neuroprotective agents; axonal regeneration CBG; neuronal injury; natural products; NSC-34; neuroprotective agents; axonal regeneration
►▼ Show Figures 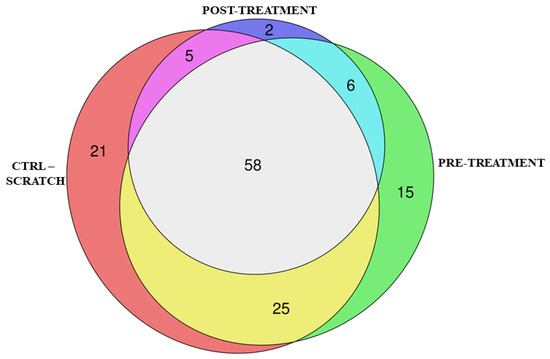