Fabric anomaly detection (AD) tries to detect anomalies (i.e., defects) in fabrics, and fabric AD approaches are continuously improved with respect to their AD performance. However, developed solutions are known to generalize poorly to previously unseen fabrics, posing a crucial limitation to their applicability. Moreover, current research focuses on adapting converged models to previously unseen fabrics in a post hoc manner, rather than training models that generalize better in the first place. In our work, we explore this potential for the first time. Specifically, we propose that previously unseen fabrics can be regarded as shifts in the underlying data distribution. We therefore argue that factors which reportedly improve a model’s resistance to distribution shifts should also improve the performance of supervised fabric AD methods on unseen fabrics. Hence, we assess the potential benefits of: (I) vicinal risk minimization (VRM) techniques adapted to the fabric AD use-case, (II) different loss functions, (III) ImageNet pre-training, (IV) dataset diversity, and (V) model architecture as well as model complexity. The subsequently performed large-scale analysis reveals that (I) only the VRM technique, AugMix, consistently improves performance on unseen fabrics; (II) hypersphere classifier outperforms other loss functions when combined with AugMix and (III) ImageNet pre-training, which is already beneficial on its own; (IV) increasing dataset diversity improves performance on unseen fabrics; and (V) architectures with better ImageNet performance also perform better on unseen fabrics, yet the same does not hold for more complex models. Notably, the results show that not all factors and techniques which reportedly improve a model’s resistance to distribution shifts in natural images also improve the generalization of supervised fabric AD methods to unseen fabrics, demonstrating the necessity of our work. Additionally, we also assess whether the performance gains of models which generalize better propagate to post hoc adaptation methods and show this to be the case. Since no suitable fabric dataset was publicly available at the time of this work, we acquired our own fabric dataset, called OLP, as the basis for the above experiments. OLP consists of 38 complex, patterned fabrics, more than 6400 images in total, and is made publicly available. View Full-Text
Keywords: supervised anomaly detection; automated visual inspection; fabric defect detection; model generalization supervised anomaly detection; automated visual inspection; fabric defect detection; model generalization
►▼ Show Figures 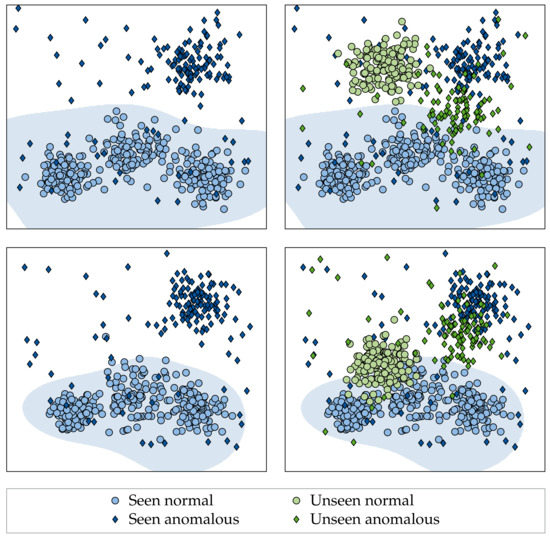