The Promise of Sleep: A Multi-Sensor Approach for Accurate Sleep Stage Detection Using the Oura Ring

The 2019–2020 Rise in Lake Victoria Monitored from Space: Exploiting the State-of-the-Art GRACE-FO and the Newly Released ERA-5 Reanalysis Products

During the period 2019–2020, Lake Victoria water levels rose at an alarming rate that has caused various problems in the region. The influence of this phenomena on surface and subsurface water resources has not yet been investigated, largely due to lack of enough in situ measurements compounded by the spatial coverage of the lake’s basin, incomplete/inconsistent hydrometeorological data, and unavailable governmental data. Within the framework of joint data assimilation into a land surface model from multi-mission satellite remote sensing, this study employs the state-of-art Gravity Recovery and Climate Experiment follow-on (GRACE-FO) time-variable terrestrial water storage (TWS), newly released ERA-5 reanalysis, and satellite radar altimetry products to understand the cause of the rise of Lake Victoria on the one hand, and the associated impacts of the rise on the total water storage compartments (surface and groundwater) triggered by the extreme climatic event on the other hand. In addition, the study investigates the impacts of large-scale ocean–atmosphere indices on the water storage changes. The results indicate a considerable increase in water storage over the past two years, with multiple subsequent positive trends mainly induced by the Indian Ocean Dipole (IOD). Significant storage increase is also quantified in various water components such as surface water and water discharge, where the results show the lake’s water level rose by m, leading to approximately 1750 gigatonne volume increase. Multiple positive trends are observed in the past two years in the lake’s water storage increase with two major events in April–May 2019 and December 2019–January 2020, with the rainfall occurring during the short rainy season of September to November (SON) having had a dominant effect on the lake’s rise. View Full-Text
Keywords: Lake Victoria; data assimilation; satellite radar altimetry; GRACE follow-on; water storage changes; land surface modelling Lake Victoria; data assimilation; satellite radar altimetry; GRACE follow-on; water storage changes; land surface modelling
►▼ Show Figures 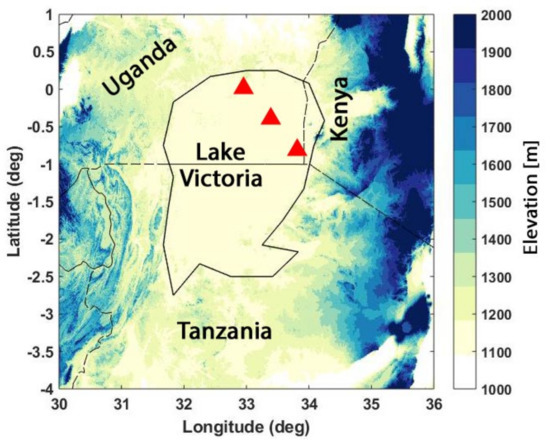