Maintaining environmental conditions for proper plant growth in greenhouses requires managing a variety of factors; ventilation is particularly important because inside temperatures can rise rapidly in warm climates. The structure of the window installed in a greenhouse is very diverse, and it is difficult to identify the characteristics that affect the temperature inside the greenhouse when multiple windows are driven, respectively. In this study, a new ventilation control logic using an output feedback neural-network (OFNN) prediction and optimization method was developed, and this approach was tested in multi-window greenhouses used for strawberry production. The developed prediction model used 15 inputs and achieved a highly accurate performance (R2 of 0.94). In addition, the method using an algorithm based on an OFNN was proposed for optimizing considered six window-opening behavior. Three case studies confirmed the optimization performance of OFNN in the nonlinear model and verified the performance through simulations. Finally, a control system based on this logic was used in a field experiment for six days by comparing two greenhouses driven by conventional control logic and the developed control logic; a comparison of the results showed RMSEs of 3.01 °C and 2.45 °C, respectively. It confirmed the improved control performance in comparison to a conventional ventilation control system. View Full-Text
Keywords: greenhouse climate modeling; machine learning; multi-window ventilation; greenhouse climate control greenhouse climate modeling; machine learning; multi-window ventilation; greenhouse climate control
►▼ Show Figures 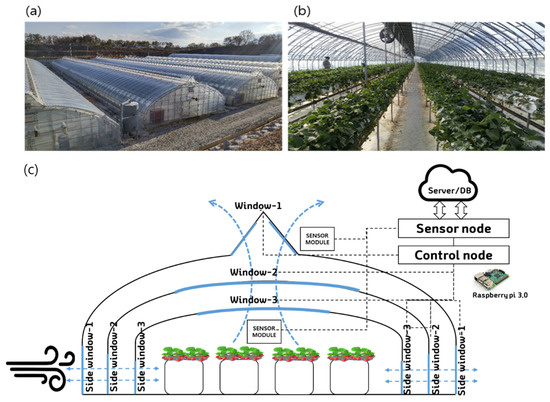