In this study, an impact-driven piezoelectric energy harvester (PEH) in magnetic field is presented. The PEH consists of a piezoelectric cantilever beam and plural magnets. At its initial status, the beam tip magnet is attracted by a second magnet. The second magnet is moved away by hand and then the beam tip magnet moves to a third magnet by the guidance of the magnetic fields. The impact occurs when the beam motion is stopped by the third magnet. The impact between magnets produces an impact energy and causes a transient beam vibration. The electric energy is generated by the piezoelectric effect. Based on the energy principle, a multi-DOF (multi-degree of freedom) mathematical model was developed to calculate the displacements, velocities, and voltage outputs of the PEH. A prototype of the PEH was fabricated. The voltages outputs of the beam were monitored by an oscilloscope. The maximum generated energy was about 0.4045 mJ for a single impact. A comparison between numerical and experimental results was presented in detail. It showed that the predictions based on the model agree with the experimental measurements. The PEH was connected to a diode bridge rectifier and a storage capacitor. The charges generated by the piezoelectric beam were stored in the capacitor by ten impacts. The experiments showed that the energy stored in the capacitor can light up the LED. View Full-Text
Keywords: piezoelectric energy harvesting; vibration; frequency-up conversion piezoelectric energy harvesting; vibration; frequency-up conversion
►▼ Show Figures 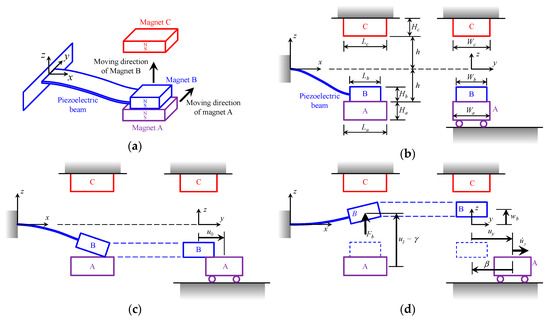