Colorimetric Paper-Based Device for Hazardous Compounds Detection in Air and Water: A Proof of Concept

In the last decades, the increase in global industrialization and the consequent technological progress have damaged the quality of the environment. As a consequence, the high levels of hazardous compounds such as metals and gases released in the atmosphere and water, have raised several concerns about the health of living organisms. Today, many analytical techniques are available with the aim to detect pollutant chemical species. However, a lot of them are not affordable due to the expensive instrumentations, time-consuming processes and high reagents volumes. Last but not least, their use is exclusive to trained operators. Contrarily, colorimetric sensing devices, including paper-based devices, are easy to use, providing results in a short time, without particular specializations to interpret the results. In addition, the colorimetric response is suitable for fast detection, especially in resource-limited environments or underdeveloped countries. Among different chemical species, transition and heavy metals such as iron Fe(II) and copper Cu(II) as well as volatile compounds, such as ammonia (NH3) and acetaldehyde (C2H4O) are widespread mainly in industrialized geographical areas. In this work, we developed a colorimetric paper-based analytical device (PAD) to detect different contaminants, including Fe2+ and Cu2+ ions in water, and NH3 and C2H4O in air at low concentrations. This study is a “proof of concept” of a new paper sensor in which the intensity of the colorimetric response is proportional to the concentration of a detected pollutant species. The sensor model could be further implemented in other technologies, such as drones, individual protection devices or wearable apparatus to monitor the exposure to toxic species in both indoor and outdoor environments. View Full-Text
Keywords: PAD; environmental monitoring; colorimetric detection; water; atmosphere PAD; environmental monitoring; colorimetric detection; water; atmosphere
►▼ Show Figures 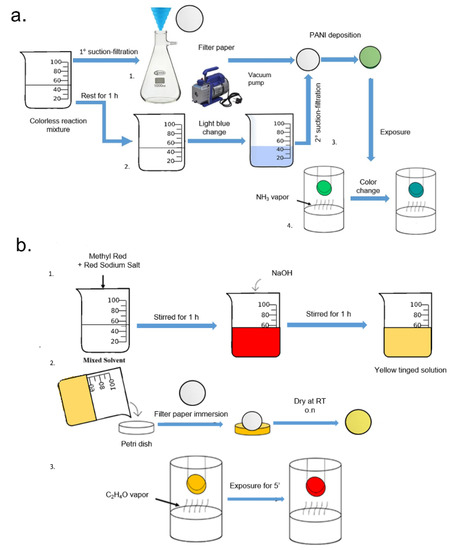