IoT Wearable Sensors and Devices in Elderly Care: A Literature Review
Next Article in Special Issue

The Influence of Surface Topography on the Weak Ground Shaking in Kathmandu Valley during the 2015 Gorkha Earthquake, Nepal

Polar motion (PM) has a close relation to the Earth’s structure and composition, seasonal changes of the atmosphere and oceans, storage of waters, etc. As one of the four major space geodetic techniques, doppler orbitography and radiopositioning integrated by satellite (DORIS) is a mature technique that can monitor PM through precise ground station positioning. There are few articles that have analyzed the PM series derived by the DORIS solution in detail. The aim of this research was to assess the PM time-series based on the DORIS solution, to better capture the time-series. In this paper, Fourier fast transform (FFT) and singular spectrum analysis (SSA) were applied to analyze the 25 years of PM time-series solved by DORIS observation from January 1993 to January 2018, then accurately separate the trend terms and periodic signals, and finally precisely reconstruct the main components. To evaluate the PM time-series derived from DORIS, they were compared with those obtained from EOP 14 C04 (IAU2000). The results showed that the RMSs of the differences in PM between them were 1.594 mas and 1.465 mas in the X and Y directions, respectively. Spectrum analysis using FFT showed that the period of annual wobble was 0.998 years and that of the Chandler wobble was 1.181 years. During the SSA process, after singular value decomposition (SVD), the time-series was reconstructed using the eigenvalues and corresponding eigenvectors, and the results indicated that the trend term, annual wobble, and Chandler wobble components were accurately decomposed and reconstructed, and the component reconstruction results had a precision of 3.858 and 2.387 mas in the X and Y directions, respectively. In addition, the tests also gave reasonable explanations of the phenomena of peaks of differences between the PM parameters derived from DORIS and EOP 14 C04, trend terms, the Chandler wobble, and other signals detected by the SSA and FFT. This research will help the assessment and explanation of PM time-series and will offer a good method for the prediction of pole shifts. View Full-Text
Keywords: polar motion; DORIS; FFT; SSA polar motion; DORIS; FFT; SSA
►▼ Show Figures 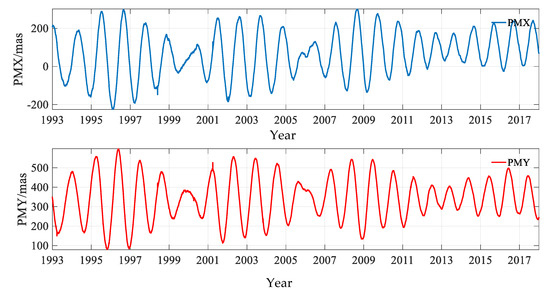