The present work provides a new approach for 3D image reconstruction of gas-liquid two-phase flow (GLF) in mini-channels based on a new optical sensor. The sensor consists of a vertical and a horizontal photodiode array. Firstly, with the optical signals obtained by the vertical array, a measurement model developed by Support Vector Regression (SVR) was used to determine the cross-sectional information. The determined information was further used to reconstruct cross-sectional 2D images. Then, the gas velocity was calculated according to the signals obtained by the horizontal array, and the spatial interval of the 2D images was determined. Finally, 3D images were reconstructed by piling up the 2D images. In this work, the cross-sectional gas-liquid interface was considered as circular, and high-speed visualization was utilized to provide the reference values. The image deformation caused by channel wall was also considered. Experiments of slug flow in a channel with an inner diameter of 4.0 mm were carried out. The results verify the feasibility of the proposed 3D reconstruction method. The proposed method has the advantages of simple construct, low cost, and easily multipliable. The reconstructed 3D images can provide detailed and undistorted information of flow structure, which could further improve the measurement accuracy of other important parameters of gas-liquid two-phase flow, such as void fraction, pressure drop, and flow pattern. View Full-Text
Keywords: gas-liquid two-phase flow; mini-channels; optical sensor; 3D image reconstruction; slug flow; Support Vector Machine gas-liquid two-phase flow; mini-channels; optical sensor; 3D image reconstruction; slug flow; Support Vector Machine
►▼ Show Figures 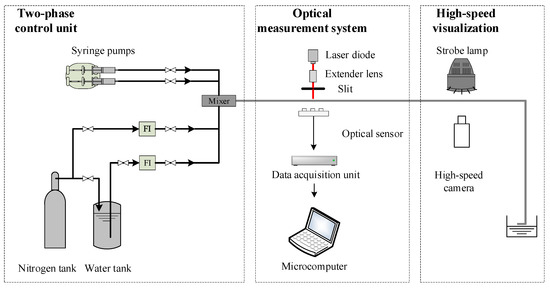