Quality Control Procedure Based on Partitioning of NMR Time Series

The quality of the magnetic resonance spectroscopy (MRS) depends on the stability of magnetic resonance (MR) system performance and optimal hardware functioning, which ensure adequate levels of signal-to-noise ratios (SNR) as well as good spectral resolution and minimal artifacts in the spectral data. MRS quality control (QC) protocols and methodologies are based on phantom measurements that are repeated regularly. In this work, a signal partitioning algorithm based on a dynamic programming (DP) method for QC assessment of the spectral data is described. The proposed algorithm allows detection of the change points—the abrupt variations in the time series data. The proposed QC method was tested using the simulated and real phantom data. Simulated data were randomly generated time series distorted by white noise. The real data were taken from the phantom quality control studies of the MRS scanner collected for four and a half years and analyzed by LCModel software. Along with the proposed algorithm, performance of various literature methods was evaluated for the predefined number of change points based on the error values calculated by subtracting the mean values calculated for the periods between the change-points from the original data points. The time series were checked using external software, a set of external methods and the proposed tool, and the obtained results were comparable. The application of dynamic programming in the analysis of the phantom MRS data is a novel approach to QC. The obtained results confirm that the presented change-point-detection tool can be used either for independent analysis of MRS time series (or any other) or as a part of quality control. View Full-Text
Keywords: magnetic resonance spectroscopy; reproducibility; quality control; biomedical signal processing; change points detection magnetic resonance spectroscopy; reproducibility; quality control; biomedical signal processing; change points detection
►▼ Show Figures 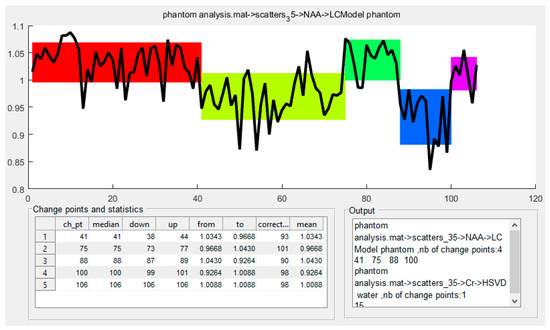