:
For planetary gear has the characteristics of small volume, light weight and large transmission ratio, it is widely used in high speed and high power mechanical system. Poor working conditions result in frequent failures of planetary gear. A method is proposed for diagnosing faults in planetary gear based on permutation entropy of Complete Ensemble Empirical Mode Decomposition with Adaptive Noise (CEEMDAN) Adaptive Neuro-fuzzy Inference System (ANFIS) in this paper. The original signal is decomposed into 6 intrinsic mode functions (IMF) and residual components by CEEMDAN. Since the IMF contains the main characteristic information of planetary gear faults, time complexity of IMFs are reflected by permutation entropies to quantify the fault features. The permutation entropies of each IMF component are defined as the input of ANFIS, and its parameters and membership functions are adaptively adjusted according to training samples. Finally, the fuzzy inference rules are determined, and the optimal ANFIS is obtained. The overall recognition rate of the test sample used for ANFIS is 90%, and the recognition rate of gear with one missing tooth is relatively high. The recognition rates of different fault gears based on the method can also achieve better results. Therefore, the proposed method can be applied to planetary gear fault diagnosis effectively.
Keywords:
planetary gear; fault diagnosis; CEEMDAN; permutation entropy; ANFIS

EEMD decomposition is made improvement based on the EMD decomposition, using the mean scale characteristics of white noise to make the signal continuous in each scale, so that the distribution of extreme points in the signal change, which effectively solves the problem, mode mixing, of EMD.
Although EEMD can effectively alleviate mode mixing, a problem of EMD, EEMD cannot maintain the completeness of EMD, and it contains residual noise in each IMF component and residual component of its decomposition, which affects the accuracy of reconstructing the original signal. Therefore, the CEEMDAN algorithm is proposed. The multiple EMD decomposition is performed on the adaptive noise component added to each stage, and IMF is calculated by averaging the results. Thus completeness of EMD is maintained, and the problems which are model mixing problem and reconstruction errors caused by the low efficiency are solved.
To better describe CEEMDAN algorithm, define an operator , its function is to solve the kth modal component of EMD decomposition. Let be the white noise satisfying distribution of , and is the amplitude coefficient of white noise added for the Kth time. The decomposition process for the specific CEEMDAN is shown below:

(1)
Layer 1 is input layer which is composed of square nodes, and the membership degree of the output fuzzy set corresponding to each input is calculated by blurring the input quantity. The transfer function transmitted from the first layer nodes to the second layer nodes can be expressed as follows: where and are two inputs of ANFIS, and , which often use Gauss function, are membership functions of fuzzy sets.
(2)
Layer 2 is rule operation layer which is composed of round nodes. Each node represents one rule. The fitness of each rule is obtained by performing product operation, which is expressed as follows:
(3)
Layer 3 is normalized layer which is composed of circular nodes, whose function is to the normalize fitness fuzzy rules. where is the fitness of the ith rule.
(4)
Layer 4 is rule output layer which is composed of square nodes. Each node’s transfer function is a linear function, whose role is to calculate the output of all fuzzy rules, expressed as follows: where represents the output value of the rule layer, and the set composed of , , is the conclusion parameter set of the regular layer.
(5)
Layer 5 is output layer which is composed of round nodes, whose role is to calculate the sum of all outputs. It can be expressed as follows:
The essence of fault diagnosis research using ANFIS is to adjust the premise parameter and conclusion parameter of the model constantly. The correction method generally includes BP algorithm and hybrid algorithm. However, in the practical application of the fault diagnosis, both hybrid algorithm and BP algorithm have slow training speed, which can make algorithms easily fall into the local minimum. Therefore, this study overcomes slow convergence which BP algorithm usually has by using numerical optimization technique and Levenberg-Marquart algorithm.

In order to verify the feasibility and effectiveness of the proposed gear fault diagnosis method based on permutation entropy of CEEMDAN and ANFIS, the experiment uses the machinery fault simulator made by Spectra Quest, an American company. Experiment table, as shown in Figure 2, consists of the following systems: motor, two stage planetary gear box, two-parallel-shaft gearbox consisting of a rolling bearing or two parallel shafts, bearing load, magnetic brake, vibration sensor, signal acquisition system and portable computer. The test bench contains configuration of the powertrain, which is suitable for study based on diagnostic technology, lubrication conditions, gear box dynamics and health monitoring of abrasive particle analysis, noise characteristics and vibration characteristics. So the experiment table can simulate four fault states which are normal gear, broken gear, gear with one missing tooth and gear with a tooth root crack, as shown in Figure 3. And the basic parameters of the second-stage planetary gear are shown in Table 1. Because of the requirement of load and load change, the setting of gear load can be accomplished by programming. The vibration signal is detected by the 608A11PCB acceleration sensor produced by IMI. The layout mode of acceleration sensor is shown in Figure 4. The main factor affecting the signal acquisition of planetary gear is the installation position of the sensor. In this paper, the main study of the two stage planetary gear fault, and the main selection of placement of sensors to collect planetary gear’s vibration signals are position 1, position 2, position 3 and position 4. From the structure of the two stage planetary gear, the position 1 is more accurate for collecting the vibration signals of the sun gear, and it is found that vibration information is mainly concentrated on the vertical plane, so the single axis sensor installed at position 1 is selected for signal acquisition of the sun gear. The sensor has a detection frequency range of 500~10,000 Hz and a resolution of 350 g. The vibration signal detected by the acceleration sensor is accurately collected by a computer connected to the bench. In the process of gear transmission, high speed rotating sun gear meshes with multiple planetary gears at the same time, which is liable to fail. Therefore, this paper takes the sun gear damage of planetary gear as an example, and performs fault diagnosis on four states of sun gear, normal, broken teeth, missing teeth and tooth root. In the process of experiment, the output frequency of the motor is set as 40 Hz, and the operating condition is constant load. And the load controlled by a programmable brake component is set as 13.5 Nm. In the experiments, the sampling frequency is set as 13,107.2 Hz. The four kinds of vibration signals of the sun gear under constant load are collected and shown in Figure 5.

This work was supported by a Project Funded by the Priority Academic Program Development of Jiangsu Higher Education Institutions and Fundamental Research Funds for the Central Universities (grant number 2015YC02). This support is gratefully acknowledged. 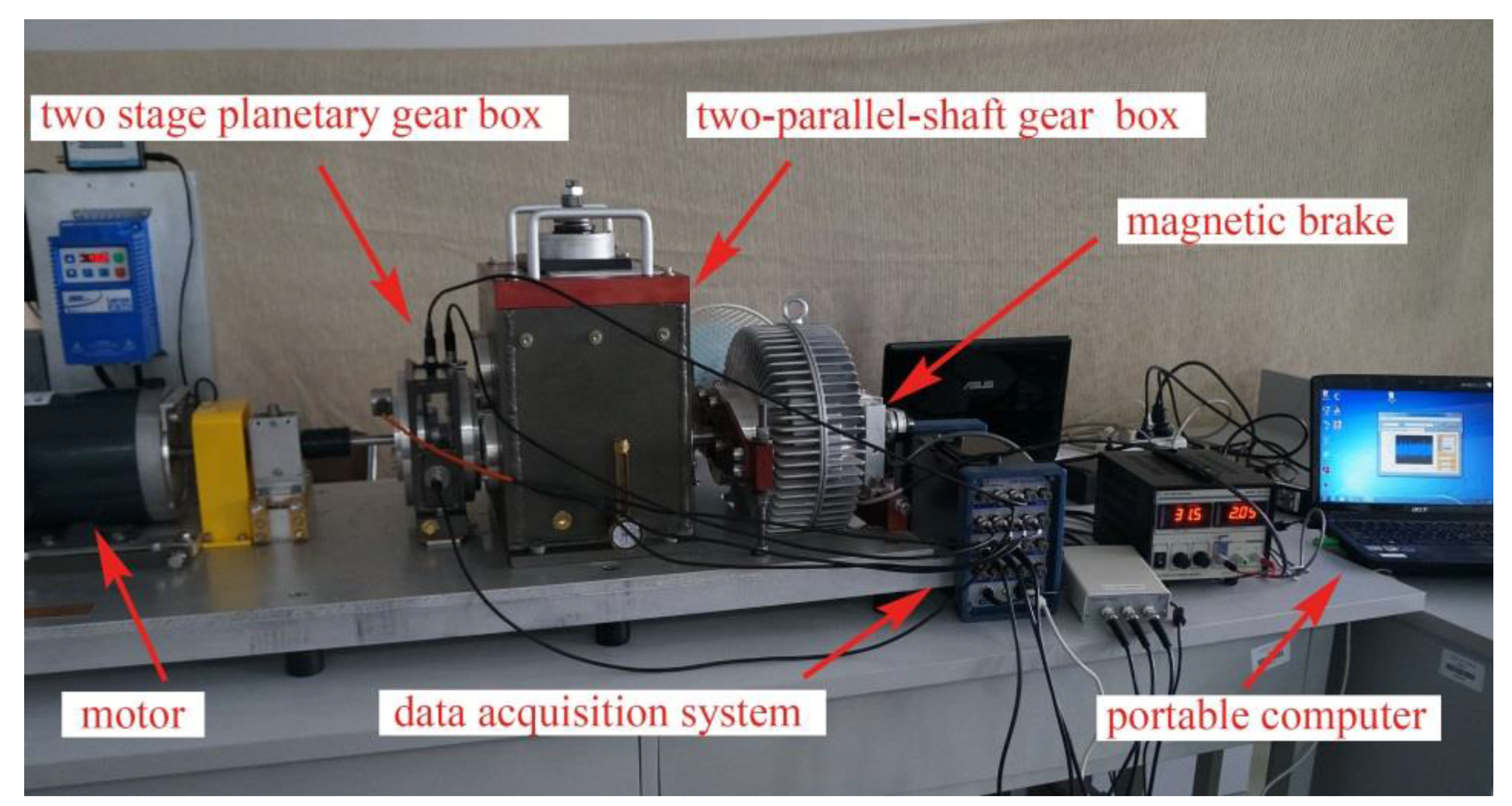 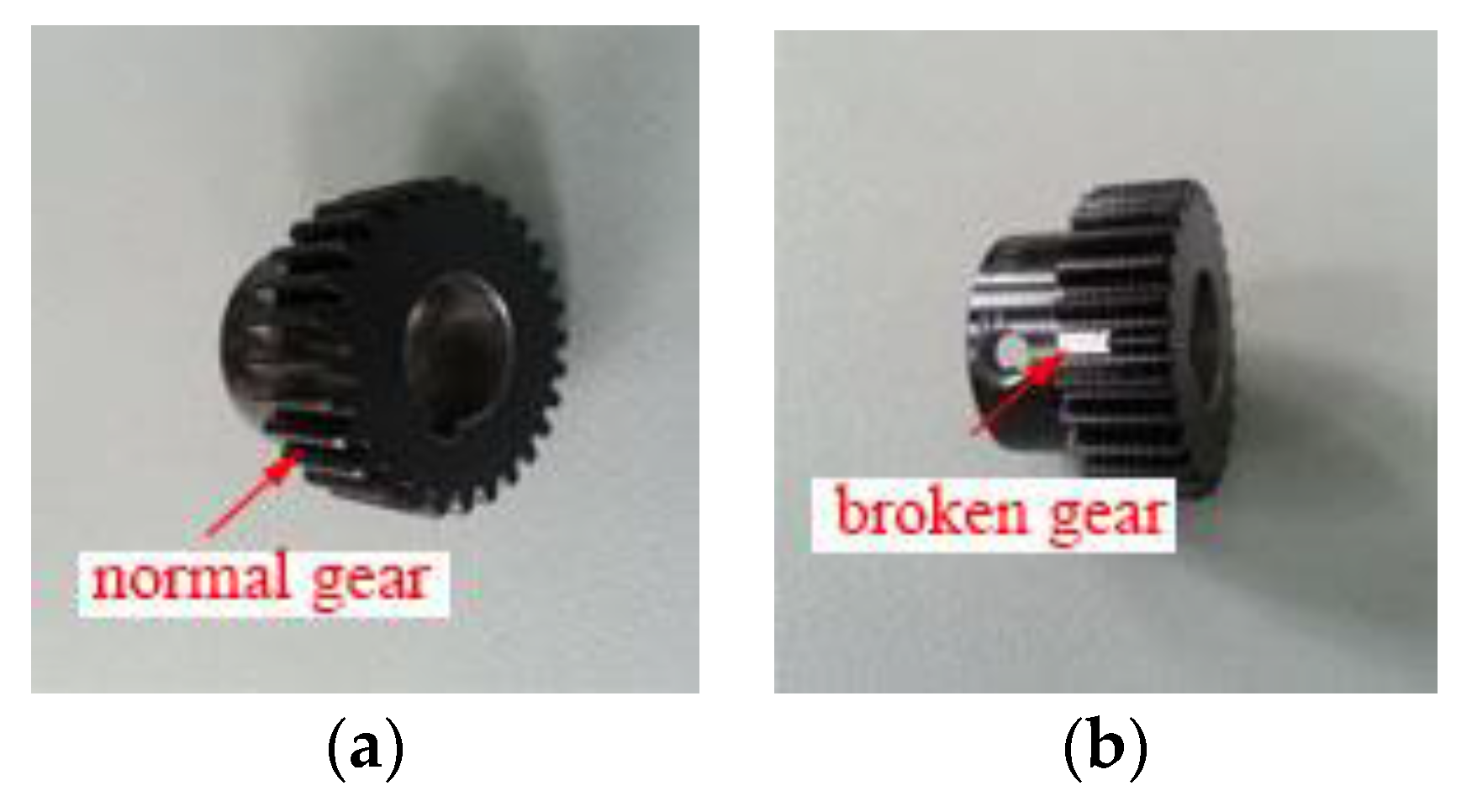 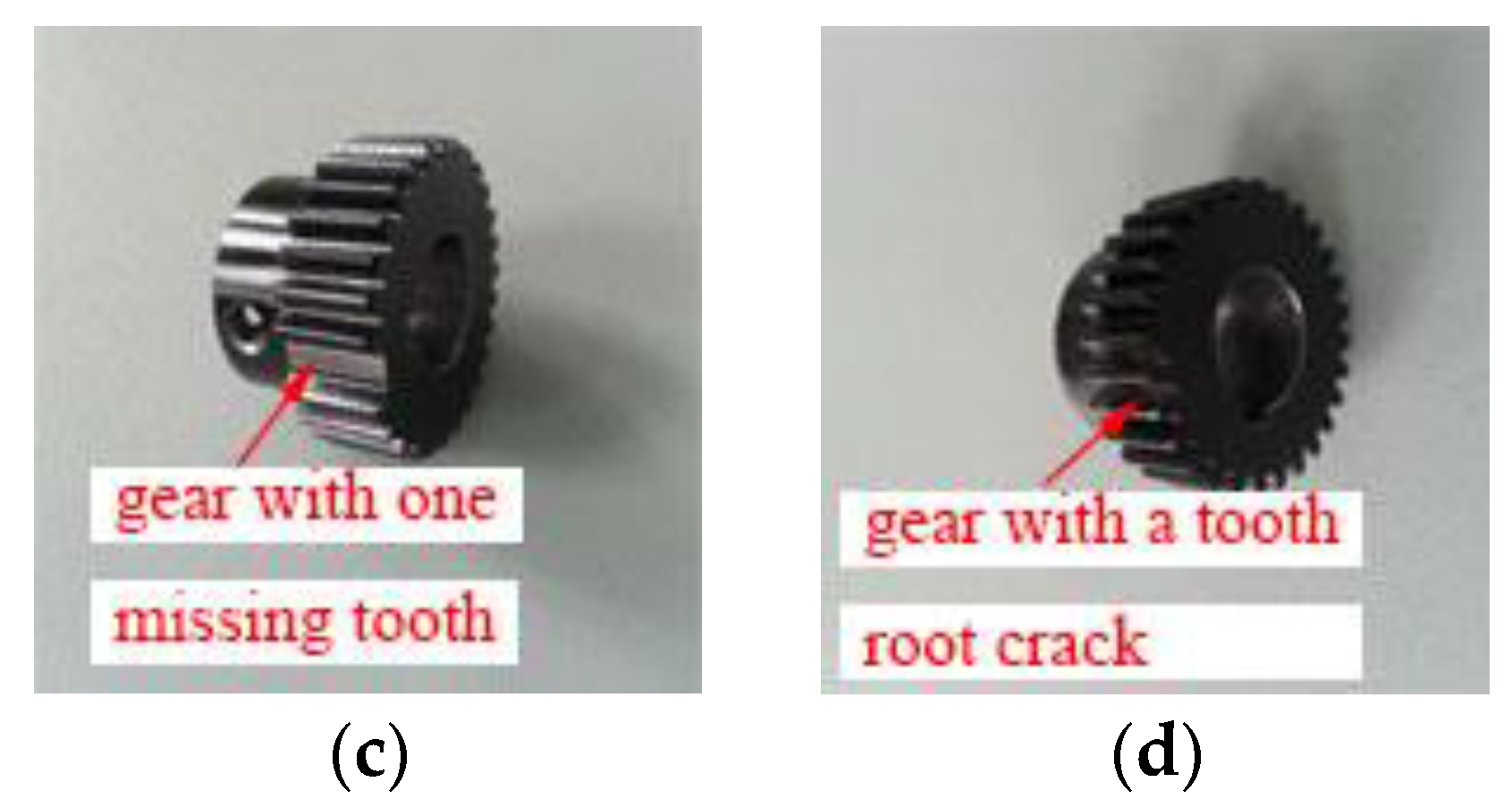 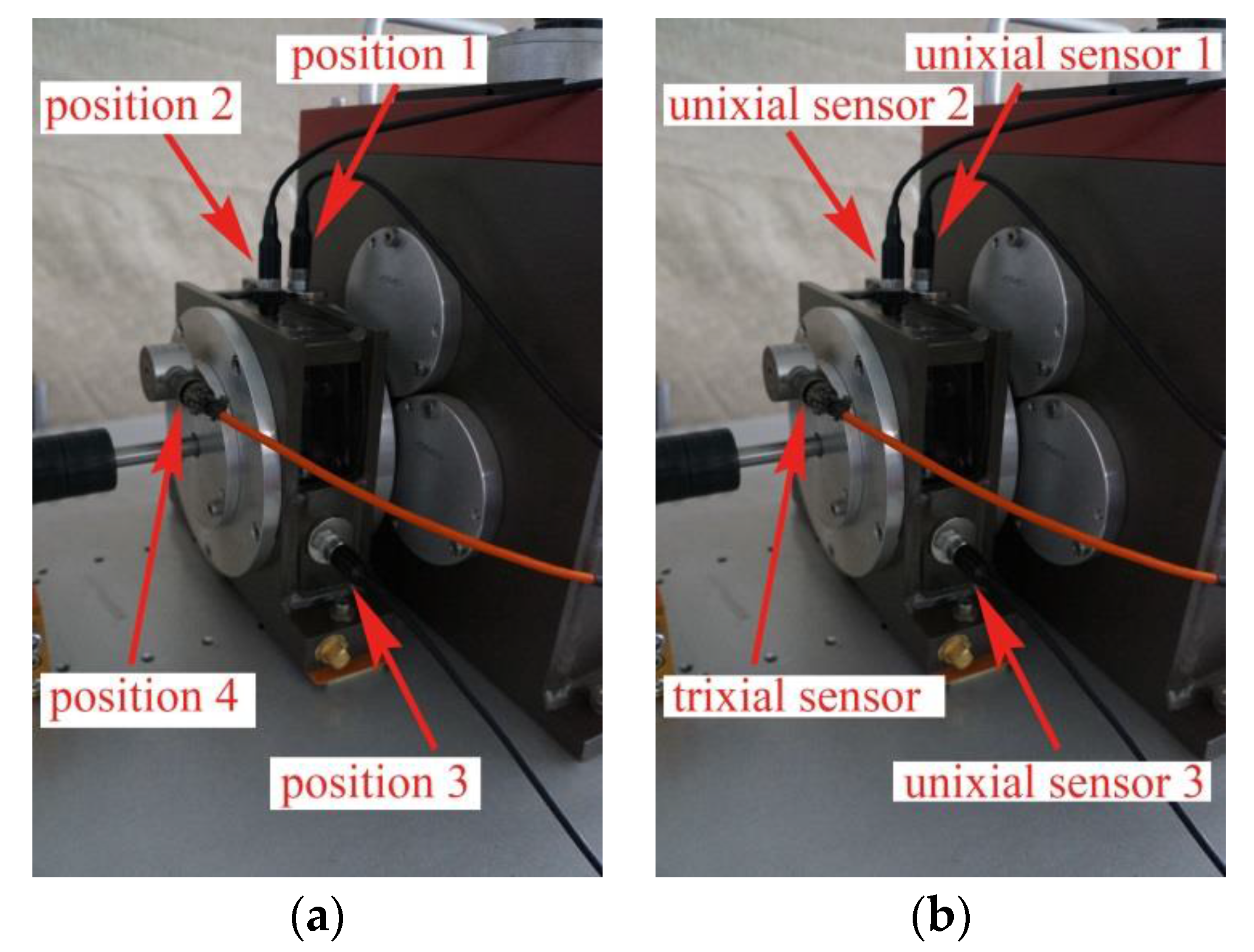 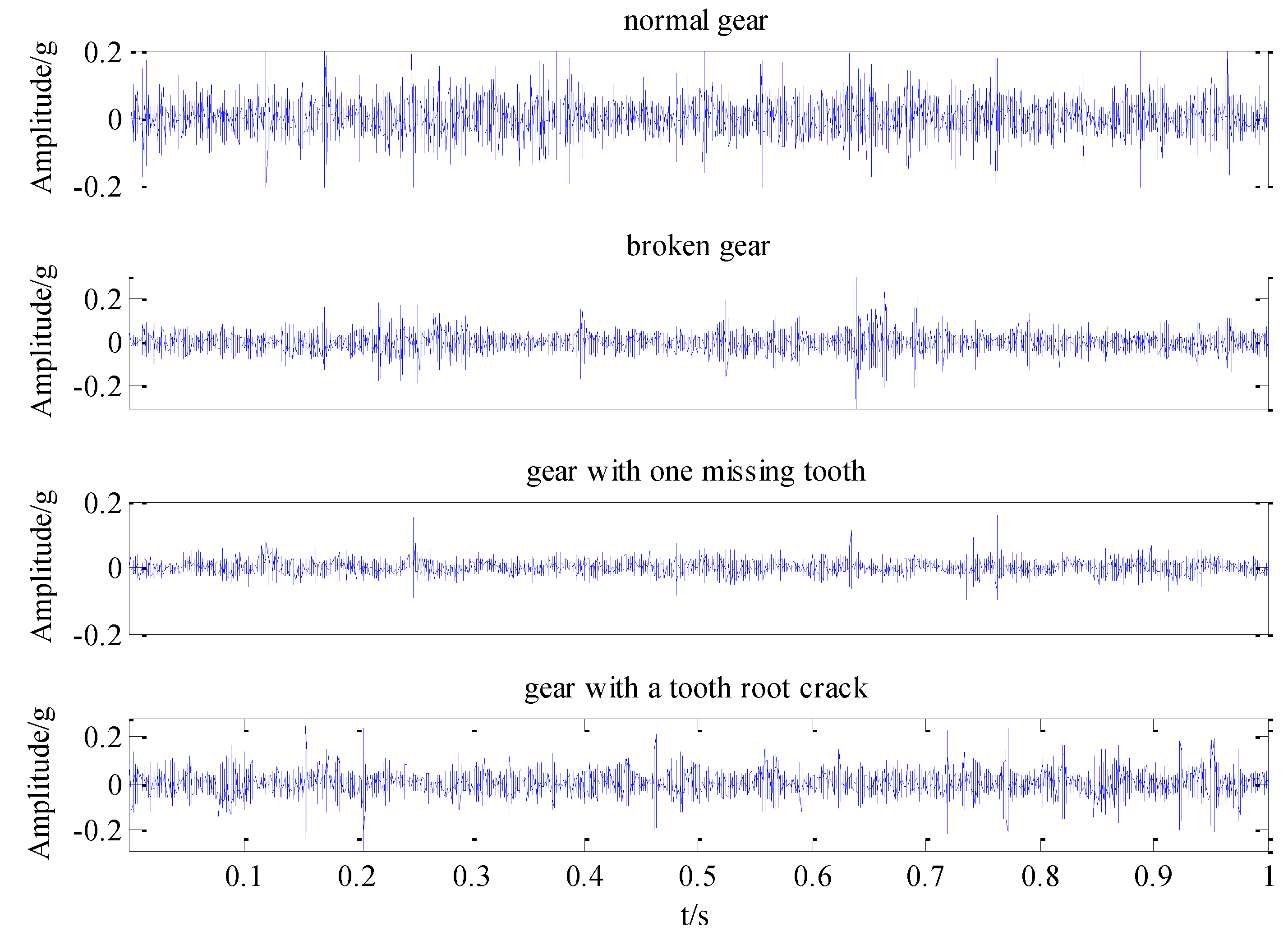 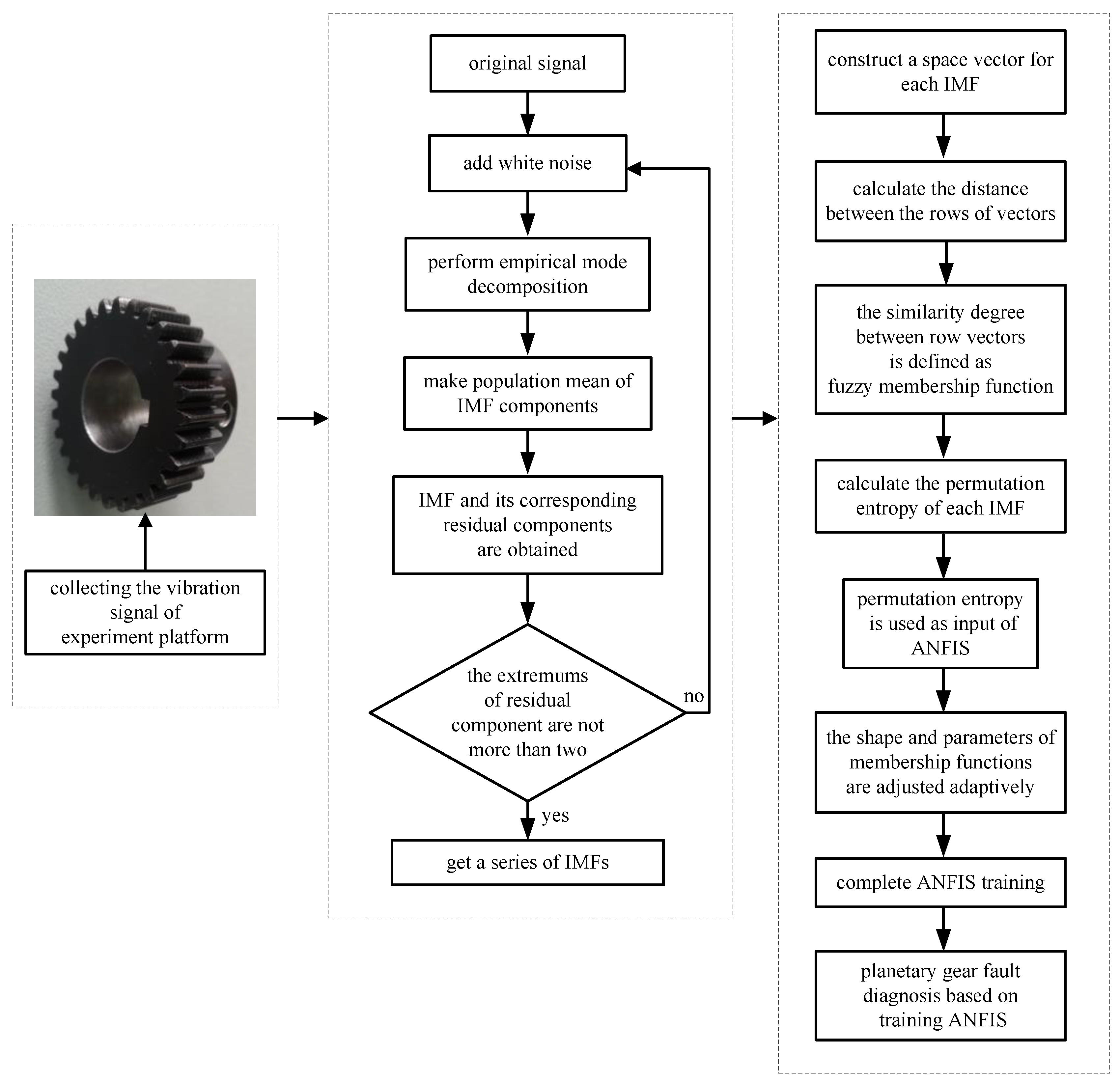 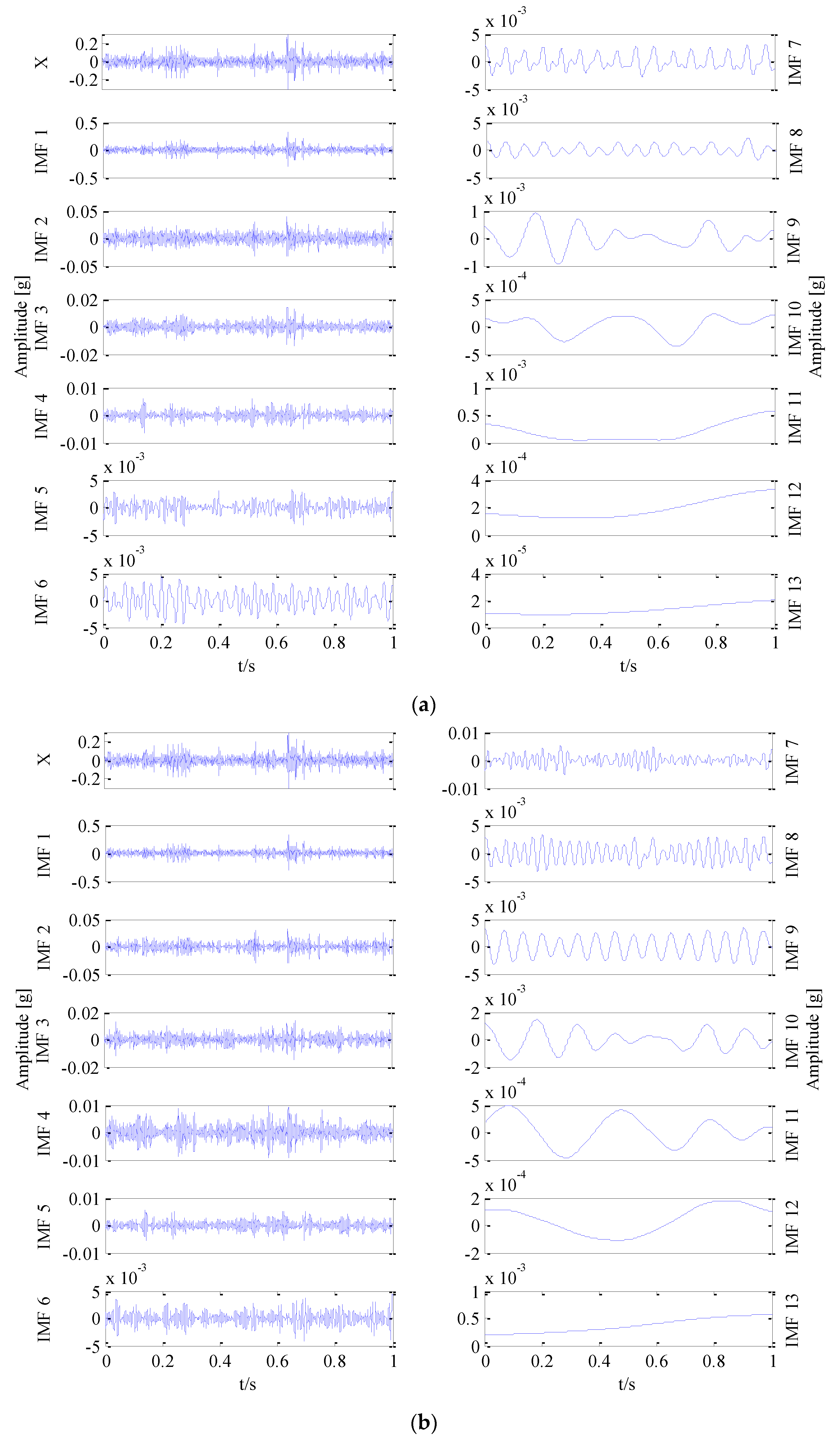 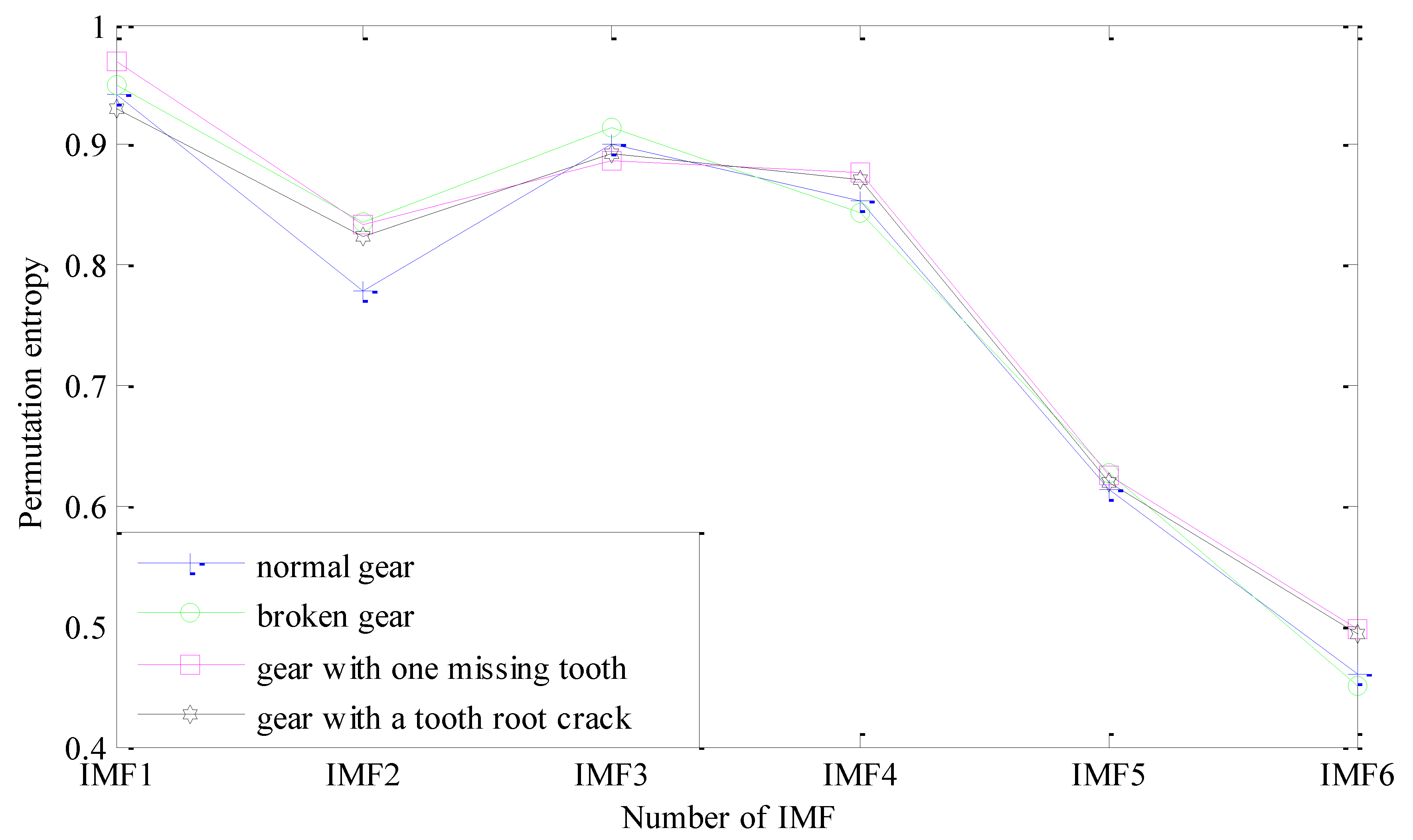 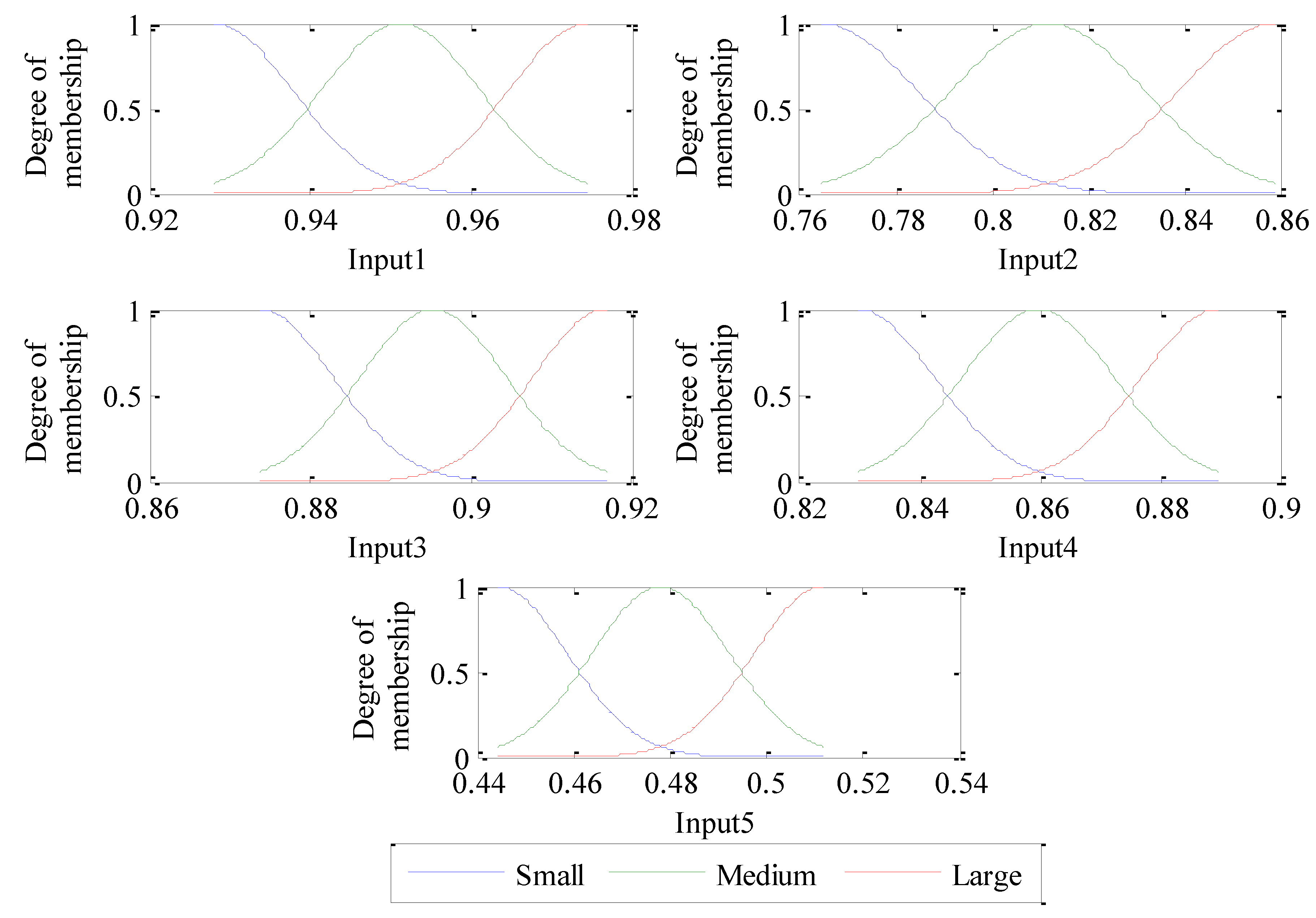 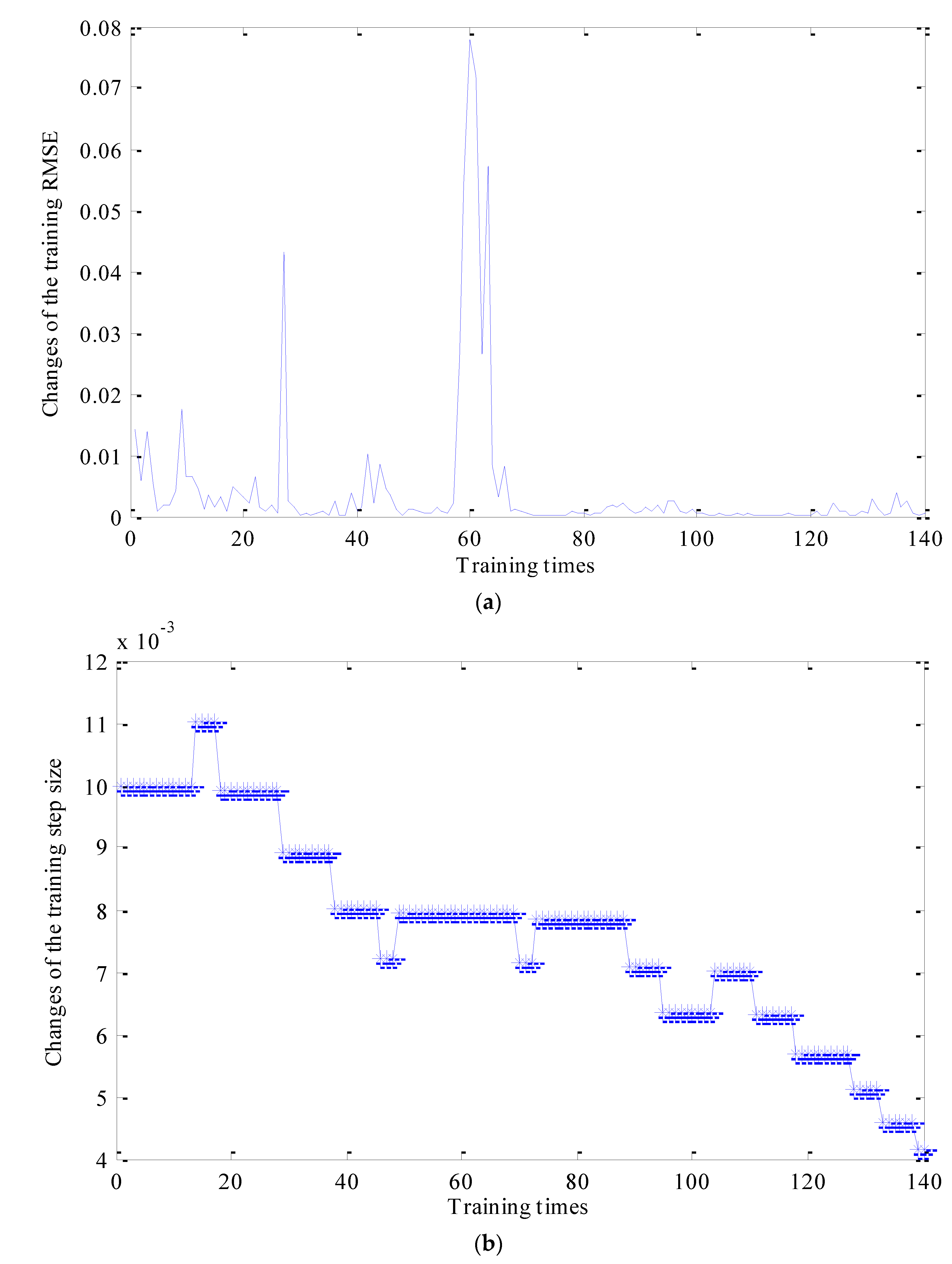 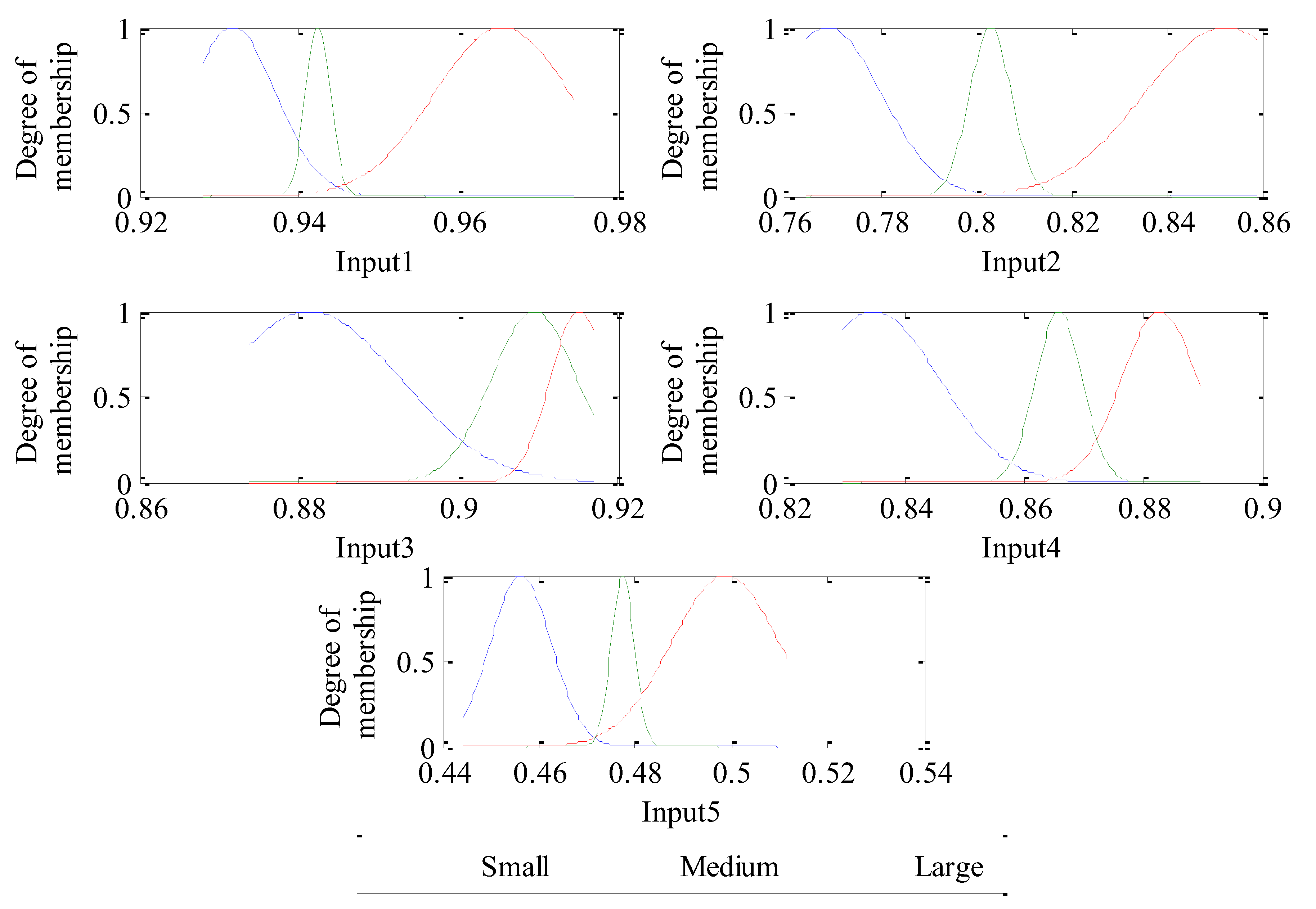 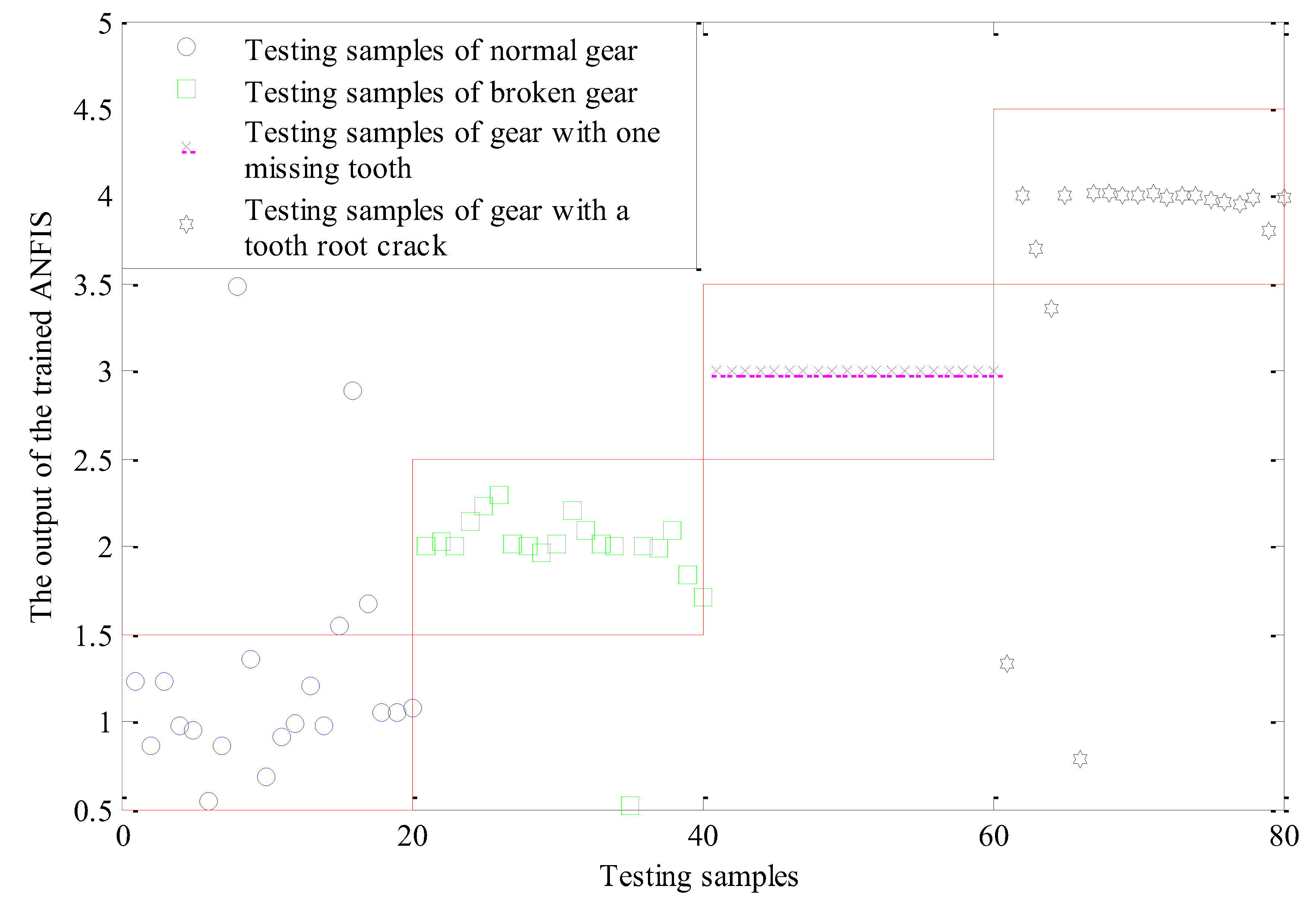