Earable TEMPO: A Novel, Hands-Free Input Device that Uses the Movement of the Tongue Measured with a Wearable Ear Sensor

In this study, an earphone-type interface named “earable TEMPO” was developed for hands-free operation, wherein the user can control the device by simply pushing the tongue against the roof of the mouth for about one second. This interface can be used to start and stop the music from a portable audio player. The earable TEMPO uses an earphone-type sensor equipped with a light emitting diode (LED) and a phototransistor to optically measure shape variations that occur in the external auditory meatus when the tongue is pressed against the roof of the mouth. To evaluate the operation of the earable TEMPO, experiments were performed on five subjects (men and women aged 22–58) while resting, chewing gum (representing mastication), and walking. The average accuracy was 100% while resting and chewing and 99% while walking. The precision was 100% under all conditions. The average recall value of the five subjects was 92%, 90%, and 48% while resting, masticating, and walking, respectively. All subjects were reliably able to perform the action of pressing the tongue against the roof of the mouth. The measured shape variations in the ear canal were highly reproducible, indicating that this method is suitable for various applications such as controlling a portable audio player. View Full-Text
Keywords: ear canal; tongue; non-invasive; optical measurement; hand-free controller ear canal; tongue; non-invasive; optical measurement; hand-free controller
►▼ Show Figures 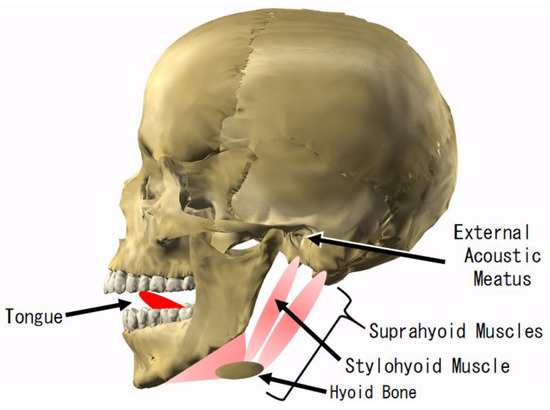