The development of diagnostics for rolling element bearings (REBs) in recent years makes it possible to detect faults in bearings in real-time. Squared envelope analysis (SEA), in which the statistical characteristics of the squared envelope (SE) or the squared envelope spectrum (SES) are analysed, is widely recognized as both an effective and the simplest method. The most critical step of SEA is to find an optimal frequency band that contains the maximum defect information. The most commonly used approaches for selecting the optimal frequency band are derived from measuring the kurtosis of the SE or the SES. However, most methods fail to cope with the interference of a single or a few impulses in the corresponding domain. A new method is proposed in this paper called “PMFSgram”, which just calculates the kurtosis of the SES in the range centred at the first two harmonics with a span of three times the modulation frequency rather than the entire SES of the band filtered signals. It is possible to avoid most of the interference from a small number of undesired impulses in the SES. PMFSgram uses several bandwidths from 1.5 times to 4.5 times the fault frequency and for each bandwidth has the same number of central frequencies. The frequency setting method is able to select an optimal frequency band containing most of the useful information with less noise. The performance of the new method is verified using synthesized signals and actual vibration data. View Full-Text
Keywords: roller element bearing diagnostics; squared envelope analysis; frequency band selection; locomotive powertrain roller element bearing diagnostics; squared envelope analysis; frequency band selection; locomotive powertrain
►▼ Show Figures 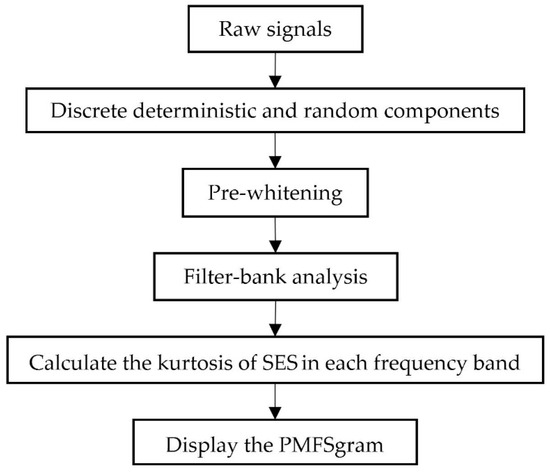