With the deepening of modern military reforms, information has become the key to winning modern warfare. The use of unmanned aerial vehicle (UAV) to capture image information has become an important means of reconnaissance in modern warfare and plays an irreplaceable role. The image information usually uses a wireless image transmission system, since image information is intercepted or stolen easily during the information transmission, encrypting an image is a common method for ensuring image security. However, traditional encryption algorithms have some deficiencies in terms of efficiency and security. In order to overcome these shortcomings, a new algorithm is proposed in this paper-an improved image scrambling encryption algorithm based on Fibonacci-p coding. The first new idea of the algorithm is to separate the positive and negative signs and data of the scrambled DCT coefficients, then form the symbol matrix and the data matrix respectively, perform the scrambling encryption operation on the symbol matrix. The second new idea is to encrypt the color RGB image by converting the R, G, and B colors into Y, Cb, and Cr, and converting the normal image operation into operations on Y, Cb, and Cr, thereby implementing the encryption operation. The comprehensive performance of the algorithm is optimal with different image information. Experiments results validate the favorable performance of the proposed improved encryption algorithm. View Full-Text
Keywords: UAV; high-definition long-distance wireless digital image transmission system; improved image scrambling encryption algorithm; Fibonacci-p coding UAV; high-definition long-distance wireless digital image transmission system; improved image scrambling encryption algorithm; Fibonacci-p coding
►▼ Show Figures 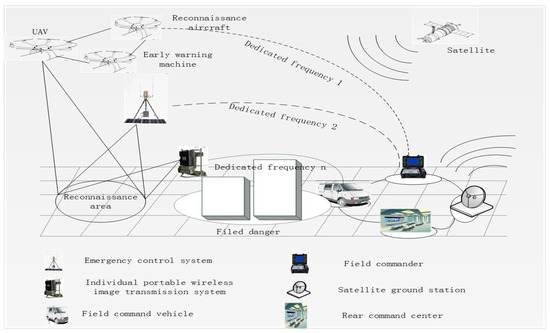