In this paper, a cell selection technique for millimeter-wave (mm-wave) cellular systems with hybrid beamforming is proposed. To select a serving cell, taking into account hybrid beamforming structures in a mm-wave cellular system, the angles of arrival and departure for all candidate cells need to be estimated in the initialization stage, requiring a long processing time. To enable simultaneous multi-beam transmissions in a multi-cell environment, a cell and beam synchronization signal (CBSS) is proposed to carry beam IDs in conjunction with cell IDs. A serving cell maximizing the channel capacity of the hybrid beamformer is selected with the estimated channel information and the optimum precoder. The performance of the proposed technique is evaluated by a computer simulation with a spatial channel model in a simple model of a mm-wave cellular system. It is shown by simulation that the proposed technique with the CBSS can significantly reduce the processing time for channel estimation and cell selection, and can achieve additional gains in channel capacity, or in bit error rate, compared to that obtained by conventional techniques. View Full-Text
Keywords: millimeter-wave; cell selection; hybrid beamforming; channel estimation millimeter-wave; cell selection; hybrid beamforming; channel estimation
►▼ Show Figures 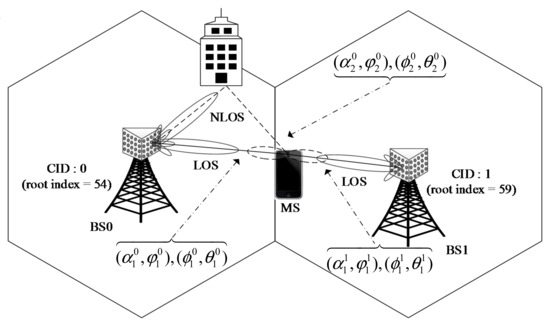