Accelerometer-based activity monitors are popular for monitoring physical activity. In this study, we investigated optimal sensor placement for increasing the quality of studies that utilize accelerometer data to assess physical activity. We performed a two-staged study, focused on sensor location and type of mounting. Ten subjects walked at various walking speeds on a treadmill, performed a deskwork protocol, and walked on level ground, while simultaneously wearing five ProMove2 sensors with a snug fit on an elastic waist belt. We found that sensor location, type of activity, and their interaction-effect affected sensor output. The most lateral positions on the waist belt were the least sensitive for interference. The effect of mounting was explored, by making two subjects repeat the experimental protocol with sensors more loosely fitted to the elastic belt. The loose fit resulted in lower sensor output, except for the deskwork protocol, where output was higher. In order to increase the reliability and to reduce the variability of sensor output, researchers should place activity sensors on the most lateral position of a participant’s waist belt. If the sensor hampers free movement, it may be positioned slightly more forward on the belt. Finally, sensors should be fitted tightly to the body. View Full-Text
Keywords: activity monitoring; waist-mounted; 3D accelerometer; physical activity; ambulatory assessment; calibration; reliability; treadmill; healthcare engineering activity monitoring; waist-mounted; 3D accelerometer; physical activity; ambulatory assessment; calibration; reliability; treadmill; healthcare engineering
►▼ Show Figures 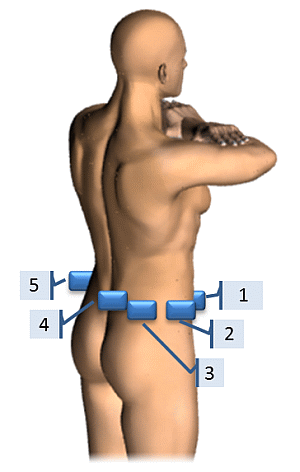