In time-of-flight (TOF) mass spectrometry (MS) [1], large molecules—the proteins—are desorbed and ionized by the matrix-assisted laser desorption/ionization (MALDI) [2,3] technique before being accelerated in an electric field, and directed into the flight tube where they are separated by their mass-to-charge (m/z) ratio. Thereby the ions of different masses reach the detector at different times and velocities, while the kinetic energy of the ions remains the same, regardless of their mass. The operating principle of the ion detectors used in most TOF mass spectrometers, e.g., the microchannel plates (MCP) and dynodes, are based on secondary electron emission [4]. In these detectors, the incident ion generates secondary electrons, which are then multiplied via a sequential cascade process. The secondary electron emission yield decreases as the velocity of the incident ions decreases [5]. This leads to a remarkable decrease in detection sensitivity for larger ions, which drift more slowly down to the detector than lighter ones. Therefore, MALDI-TOF remains predominantly restricted to the mass analysis of biomolecules with a mass below about 300,000 Daltons [6].

The characteristic frequencies for the vibration of the nanomembrane can be expressed by:

where l is the side length of the nanomembrane, i and j are integers.

Ion detection using this approach was demonstrated over a broad range with angiotensin (1,296 Da), equimolar mixture of insulin (5,729 Da), bovine serum albumin (BSA, 66,429 Da), and immunoglobulin G (IgG, 150,000 Da). The detectors demonstrated that the sensitivity was not highly dependent on the mass and the upper mass limit of the detector was estimated to be 1.5 MDa.

In the second case phonon-assisted field emission from silicon nanomembranes is employed: the detector converts thermal energy deposited by the ion bombardment directly to an electrical signal. The temperature rise in the vicinity of the impact site produces non-equilibrium phonons, which carry thermal energy away from the impact site. These non-equilibrium phonons deliver sufficient thermal energy to the electrons within the nanomembrane and excite them to higher energy states, thereby allowing them to overcome the vacuum barrier (∼4.6 eV for undoped silicon), which is lowered and thinned by external electrical fields, and escape from the nanomembrane surface via field emission. This results in the increased field emission current and can be referred to as phonon-assisted field emission and is governed by Equation (3) [12]:

where W is the work function of the material, and ΔW = (eF/4πε0)1/2 is the field-dependent correction to the work function due to tunneling through the barrier with F being the electric field strength, T is the temperature, and e and m are the electron's charge and mass, respectively.

For preparing the nanomembrae the 600 nm thick silicon layer of the silicon-on-insulator (SOI) is thinned down to 180 nm by thermal oxidation. A 150 nm thick layer of silicon nitride is deposited on both sides of the wafer using low-pressure chemical vapor deposition (LPCVD), forming a layer of Si3N4/SiO2/SOI/SiO2/Si3N4. Two square membranes (2 × 2 mm2 each) are defined by optical lithography and etched through via reactive ion etching (RIE) of Si3N4 on the backside of the wafer. The SiO2 layer on the backside of the wafer is removed by 6:1 buffered oxide etch (BOE). The Si3N4/SiO2/Si/SiO2 membranes are formed by anisotropic etching of the silicon substrate using potassium hydroxide (KOH) solution. Finally, silicon nanomembranes are formed by RIE of top Si3N4 layer followed by 6:1 BOE to etch the SiO2 on both sides of the silicon layer.

2.2. Configuration of the Detector

A 10 pmol/μL concentration of apomyoglobin (16,952 Da), aldoase (39,212 Da), and bovine serum albumin (66,430 Da) are dissolved in 0.1% trifluoroacetic acid (TFA) solution. A 10 mg/mL concentration of 3,5-dimethoxy-4-hydroxycinnamic acid (sinapinic acid) matrix was dissolved in the 50% acetonitrile in 0.05% TFA solution. A 10 pmol/μL concentration of apomyoglobin, aldose, and bovine serum albumin are mixed for the equimolar mixture (3.3 pmol/μL each) sample. All proteins, matrix, and solvents are purchased from Sigma-Aldrich (St. Louis, MO, USA).

Figure 2a shows a MALDI mass spectrum obtained using the silicon nanomembrane detector for apomyoglobin with sinapinic acid matrix. In addition to the three major peaks, corresponding to the singly charged apomyoglobin (m/z of 16,948 Da), doubly charged ions (m/z of 8,556 Da) and singly charged dimer ions (m/z of 33,876 Da), multiple peaks in masses lower than mass of the apomyoglobin are also observed with much lower amplitude. These small peaks are frequently shown in our experiments. We speculate that these peaks are fragment ions, which are produced by high laser power. The laser intensity for the spectrum is set to be slightly higher than the threshold laser intensity for BSA in an equimolar mixture of apomyoglobin, aldolase, and BSA, which will be discussed below. The mass spectrum is obtained by averaging 10 laser shots. The acceleration voltage, the voltage between the silicon nanomembrane and the extraction gate set to 23.5 kV and 1.4 kV, respectively. These instrument conditions are used for all experiments in this article.

Figure 2b shows a histogram of the MALDI-TOF mass spectrum for apomyoglobin. The peak values were extracted from 30 different MALDI-TOF mass spectra gathered for the histogram and each spectrum was obtained by averaging 10 laser shots. It shows a relative abundance of apomyoglobin ions in the sample under test with a bin size of 100 Da. The m/z values of the peaks for singly charged apomyoglobin ions are distributed in m/z range from 16,650 to 17,150 Da (center value of the bin). The m/z value of the most abundant fragment ions are distributed in 1,650 and 1,950 Da (center value of the bin).

Figure 3a shows a MALDI mass spectrum obtained using the silicon nanomembrane detector for aldolase with sinapinic acid matrix. It clearly shows singly (m/z of 39,192 Da) and doubly charged aldolase ions (m/z of 20,122 Da) as well as fragments ions over this mass range. The histogram of the MALDI-TOF mass spectrum, Figure 3b, shows the relative abundance of the fragment ions with respect to the singly charged aldolase ions with a bin size of 100 Da. The m/z values of the peaks for the singly charged aldolase ions are distributed in m/z range from 38,950 to 39,350 Da (center value of the bin). Similar to the Figure 2, a large number of fragment ions are shown and the m/z values of five most abundant fragment ions are distributed in the bin of 2,550, 3,950, 4,350, 6,450, 7,450, 7,750, 18,150 and 24,350 Da (center of the bin).

Figure 4a shows a MALDI TOF mass spectrum obtained using silicon nanomembrane for BSA with sinapinic acid matrix. The spectrum clearly shows singly charged BSA ions at m/z of 66,468 Da and large fragment ion peak at m/z of 13,493 Da. The fragment ion peak at m/z of 13,493 is frequently shown and is the most abundant ion in the sample under test as shown in Figure 4b, represented in histogram. The bin size of the histogram is 300 Da. The histogram shows a large number of fragment ions in the mass range below 15 kDa.

Figure 5a shows a MALDI-TOF mass spectrum using silicon nanomembrane for an equimolar protein mixture (3.3 pmol/μL each) of aldolse, apomyoglobin, and BSA in sinapinic acid matrix. It clearly shows singly charged apomyoglobin, aldolase, and BSA ions at m/z of 17,006, 39,007, and 66,165 Da, respectively. The peak at m/z of 14,045 Da (labeled as α) was frequently shown in the mass spectrum for BSA (Figure 4a) and the histogram for BSA (Figure 4b). The peaks at m/z of 23,991 Da (labeled as β) are also shown in the histogram (Figure 3b) for aldolase. The peak at m/z of 34,128 Da (labeled as γ) is dimer for apomyoglobin as shown in Figure 2. Figure 5b shows a histogram of the equimolar protein mixture with a bin size of 300 Da. Three most abundant ions are singly charged apomyoglobin, aldolase and doubly charged BSA with center of bin value of 16,750, 38,950, and 33,550 Da. The counts for the singly charge BSA is much smaller than that of apomyoglobin and aldolase, indicating that BSA is desorbed less preferentially than other two proteins.

RHB has a stake in Prospero Biosciences LLC, a Madison based venture, pursuing the development of detectors for mass spectrometry applications. 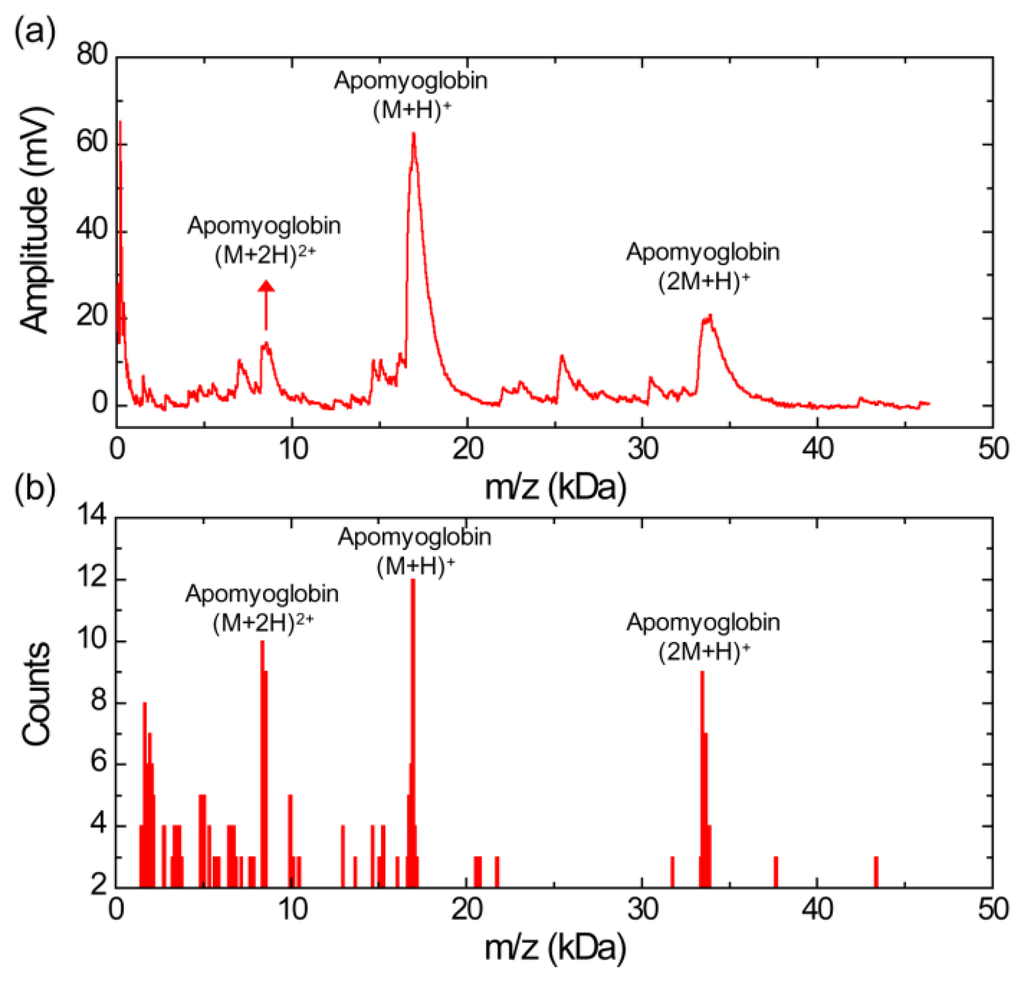 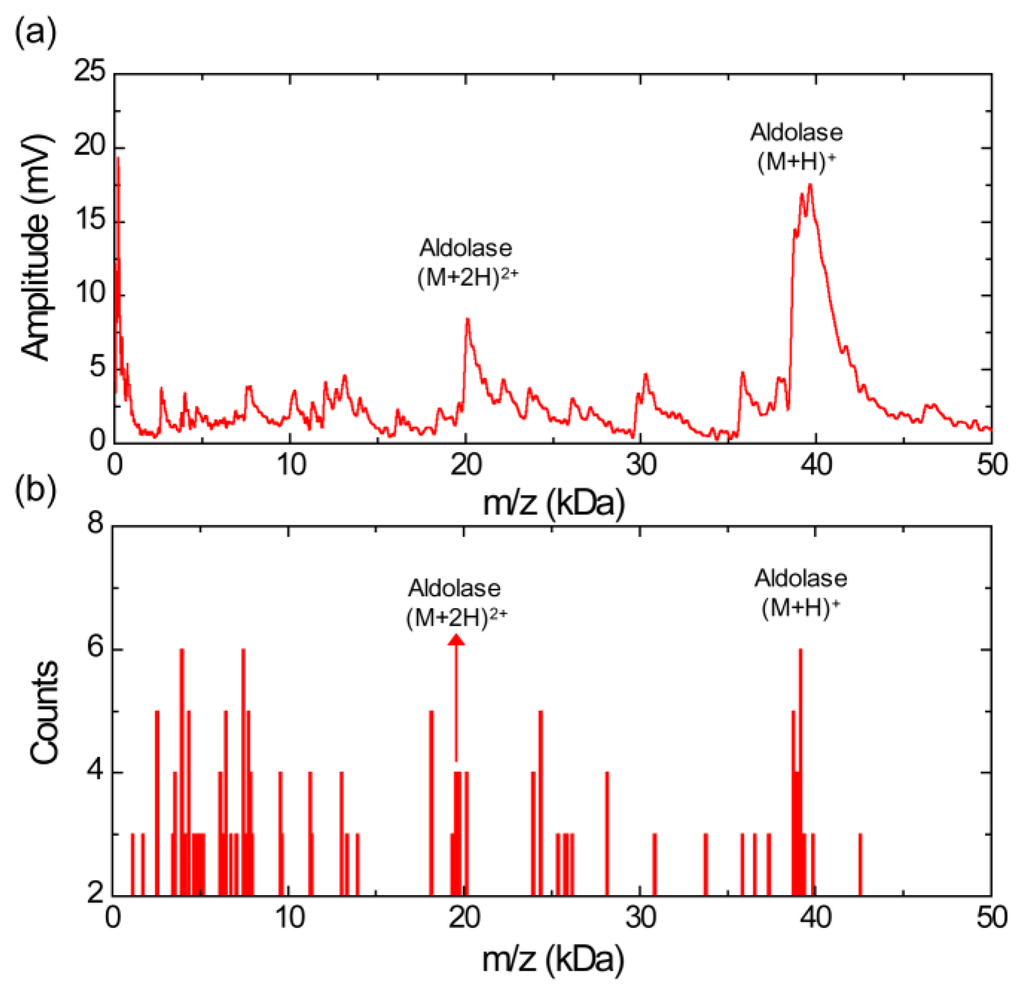