Plant development is the result of an endogenous morphogenetic program that integrates environmental signals. The so-called circadian clock is a set of genes that integrates environmental inputs into an internal pacing system that gates growth and other outputs. Study of circadian growth responses requires high sampling rates to detect changes in growth and avoid aliasing. We have developed a flexible configurable growth chamber comprising a computer vision system that allows sampling rates ranging between one image per 30 s to hours/days. The vision system has a controlled illumination system, which allows the user to set up different configurations. The illumination system used emits a combination of wavelengths ensuring the optimal growth of species under analysis. In order to obtain high contrast of captured images, the capture system is composed of two CCD cameras, for day and night periods. Depending on the sample type, a flexible image processing software calculates different parameters based on geometric calculations. As a proof of concept we tested the system in three different plant tissues, growth of petunia- and snapdragon (Antirrhinum majus) flowers and of cladodes from the cactus Opuntia ficus-indica. We found that petunia flowers grow at a steady pace and display a strong growth increase in the early morning, whereas Opuntia cladode growth turned out not to follow a circadian growth pattern under the growth conditions imposed. Furthermore we were able to identify a decoupling of increase in area and length indicating that two independent growth processes are responsible for the final size and shape of the cladode. View Full-Text
Keywords: circadian clock; floral size; diel growth; Petunia opuntia; Antirrhinum majus; computer vision circadian clock; floral size; diel growth; Petunia opuntia; Antirrhinum majus; computer vision
►▼ Show Figures 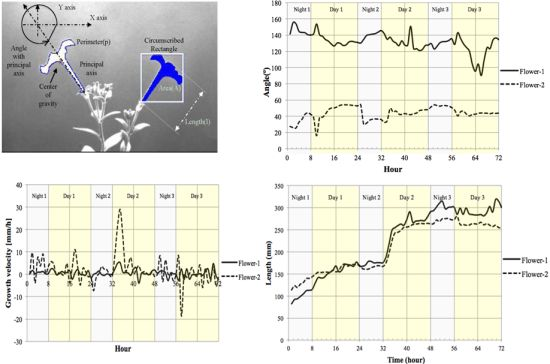