Landraces are generally neglected by industrialized agriculture, regardless of their potential to provide valuable genetic material for breeding and to diversifying the available assortment for producers and markets. They may also excel in certain plant protection issues with possible resistance or tolerance to plant pathogens. This is the first report on the disease susceptibility traits of Hungarian on certain indeterminate and determinate tomato gene bank accessions under on-farm organic conditions. For this, a three-year on-farm experiment was conducted in two management systems, open-field and protected. Yield and disease symptoms data obtained from ten tomato landraces were compared to commercial varieties. The incidence and severity of three important diseases (caused by late blight ‘Phytophthora infestans’, early blight ‘Alternaria solani’ and Septoria leafspot ‘Septoria lycopersici’), as well as yield, were recorded and assessed. According to these results, there were no significant difference between landraces and control varieties (San Marzano, Kecskeméti 549) regarding the studied parameters, and year was a determinant factor in the occurrence and severity of the infection of the studied diseases. In 2016, rainy, humid weather induced a severe late blight infection, causing serious damage to the open field, while the weather in 2015 and 2017 was favorable for tomato production and our measurements. There were some differences within and between landraces in terms of susceptibility. The investigation revealed that certain accessions can be highly recommended, e.g., the indeterminate ‘Fadd’ (RCAT030275) and ‘Mátrafüred’ (RCAT057656) had suitably high yields with significantly lower susceptibility to late blight, and the determinate ‘Szentlőrinckáta’ (RCAT078726) with high yield as well as tolerance to early blight is also recommendable, but it is sensitive to late blight under an adverse environment. This study suggests that landraces are competitive with the studied commercial varieties under organic production systems. Considering yield and the prevention of the major diseases of tomato, the studied tomato gene bank accessions are recommended for organic field and protected management systems. View Full-Text
Keywords: Solanum lycopersicum; landraces; on-farm trial; organic farming; Phytophthora infestans; Alternaria solani; Septoria lycopersici; yield; resistance Solanum lycopersicum; landraces; on-farm trial; organic farming; Phytophthora infestans; Alternaria solani; Septoria lycopersici; yield; resistance
►▼ Show Figures 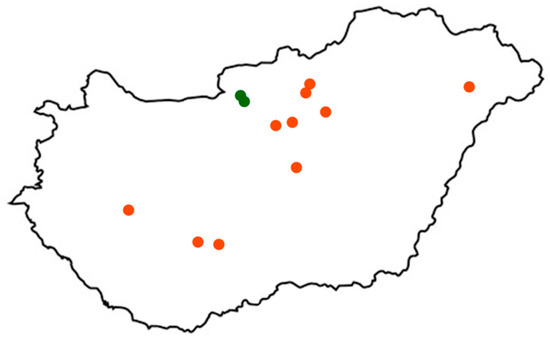