Do Weeds Hinder the Establishment of Native Plants on a Reclaimed North American Boreal Mine Site?

The majority of plant diversity in the boreal forest of northern Alberta, Canada is comprised of native understory plant species that are continuously facing competition from other species, including both undesirable native and weedy species. In oil sands mine reclamation, cover soils rich in organic matter are used to cap overburden materials. The aim of this study is to understand the role of weeds on different reclamation cover soils (forest floor-mineral mix and peat-mineral mix) and determine if they hinder the establishment of the native plant community. This study was conducted four growing seasons after site establishment in June 2019. At that time, both soil types had approximately 45% total cover, had 21 species per plot, and were composed of mainly native vegetation. Competition from non-native forbs (11% average cover, mainly Sonchus arvensis and Melilotus alba) did not seem to impact the development of the native vegetation community on either soil type given the high cover and richness of native forbs. However, native graminoids (predominantly Calamagrostis canadensis) were associated with reduced native forb cover and richness at graminoid cover greater than 17%. Overall, non-native forbs appeared to have little impact on the native forb community on either soil type while native graminoids had a negative influence. We suggest that the classification of what is considered an undesirable weedy species should be evaluated in the context of ecosystem management goals rather than simply the presence of non-native species. View Full-Text
Keywords: reclamation; boreal; competition; plant community; weedy species reclamation; boreal; competition; plant community; weedy species
►▼ Show Figures 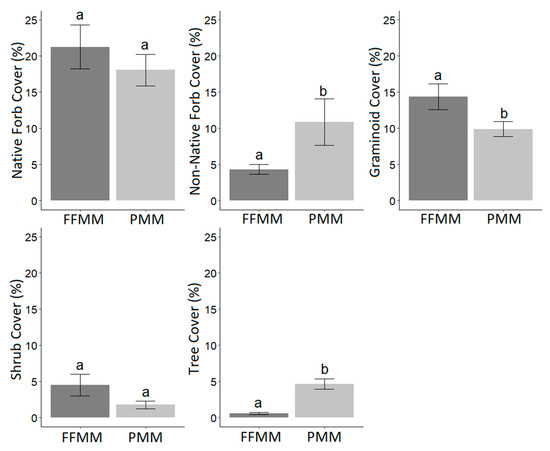