Local factors can play an important role in defining tree species distributions in species rich tropical forests. To what extent the same applies to relatively small, species poor West African montane forests is unknown. Here, forests survive in a grassland matrix and fire has played a key role in their spatial and temporal dynamics since the Miocene. To what extent these dynamics influence local species distributions, as compared with other environmental variables such as altitude and moisture remain unknown. Here, we use data from the 20.28 ha montane forest plot in Ngel Nyaki Forest Reserve, South-East Nigeria to explore these questions. The plot features a gradient from grassland to core forest, with significant edges. Within the plot, we determined tree stand structure and species diversity and identified all trees ≥1 cm in diameter. We recorded species guild (pioneer vs. shade tolerant), seed size, and dispersal mode. We analyzed and identified to what extent species showed a preference for forest edges/grasslands or core forest. Similarly, we looked for associations with elevation, distance to streams and forest versus grassland. We recorded 41,031 individuals belonging to 105 morphospecies in 87 genera and 47 families. Around 40% of all tree species, and 50% of the abundant species, showed a clear preference for either the edge/grassland habitat or the forest core. However, we found no obvious association between species guild, seed size or dispersal mode, and distance to edge, so what leads to this sorting remains unclear. Few species distributions were influenced by distance to streams or altitude. View Full-Text
Keywords: ecotone; fire; forest core; habitat preference; Ngel Nyaki; niche partitioning; savannah; species sorting; torus translation ecotone; fire; forest core; habitat preference; Ngel Nyaki; niche partitioning; savannah; species sorting; torus translation
►▼ Show Figures 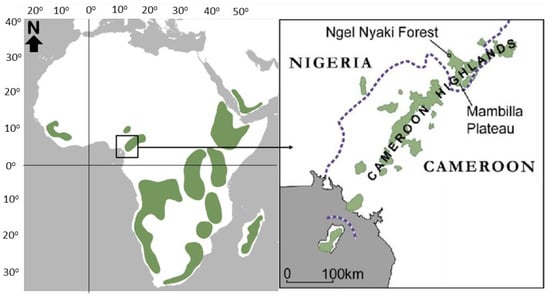