Intensive algal sampling was conducted from 2012 to 2017 in the Tomioka Peninsula, Amakusa-Shimoshima Island (the East China Sea, Japan), yielding a total of 293 benthic macroalgal taxa, of which 63% were red algae, 16% were brown algae, and 19% were green algae. The majority (69%) of species were previously recorded only for the tropics and/or subtropics, whereas 31% of species were recorded for temperate latitudes. Among all species of algae found from 2012 to 2017 in the Tomioka Peninsula, 163 species (56%) were newly identified species for Amakusa-Shimoshima Island, including six taxa, which were recorded in Japan for the first time. Comparison of the current data from the Amakusa-Shimoshima Island with those of nearby tropical regions suggested that the recent marine flora of the Amakusa-Shimoshima Island was more closely affiliated with the flora of a warm-temperate region. Moreover, we found that the benthic flora of the Tomioka Peninsula was significantly changed between the 1950s (Segawa & Yoshida 1961) and 2012–2017. For example, the species diversity was increased by two times, mainly at the expense of red and green algae, and the biogeographic status of the benthic flora was changed from the flora of a cold-temperate region to the flora of a warm-temperate region, which could be attributed to an introduction of red algae from the tropics of South East Asia and widespread opportunistic green algae, as well as the disappearance of cold-water brown algae. Collectively, our data suggested that these changes were driven by the global warming effect on the ocean. View Full-Text
Keywords: macroalgae; species inventory; amakusa-Shimoshima Island; historical changes; ocean warming macroalgae; species inventory; amakusa-Shimoshima Island; historical changes; ocean warming
►▼ Show Figures 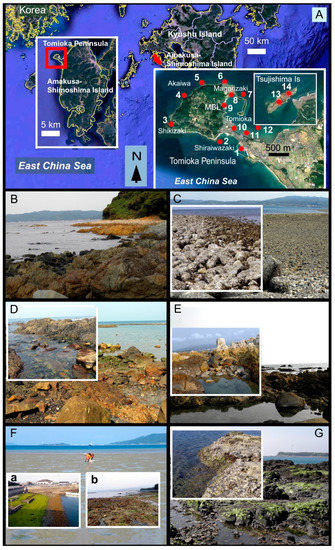