The isomerically pure 4-chlorobenzyl chloride 1 was first reported in 1878 [1] as being a low-melting solid, prepared by chlorination of pure 4-chlorotoluene. This was in contrast to the liquid product reported earlier from chlorination of toluene, which contained a significant proportion of 2-chlorobenzyl chloride. The compound is described as melting at 29 °C and being highly volatile, undergoing ready sublimation at normal temperatures [1]. Perhaps because of these properties, its X-ray structure has not so far been determined, although it is readily available from many major suppliers. However, there is an early report in which the 35Cl Zeeman quadrupole spectrum of a single crystal of 1 is used to gain some structural information [2]. We have now determined the structure of 1 and compare it both with X-ray structures of similar benzylic chlorides and the Zeeman quadrupole spectrum structural information.

Crystals suitable for diffraction were obtained from the inner surface of a commercial bottle which had been stored for >5 years, allowing slow sublimation. The resulting structure (Figure 1) shows a perfectly planar chlorobenzene ring with the CH2–Cl bond almost orthogonal.
Relatively few simple benzyl halides have so far been characterised by X-ray diffraction (Figure 2), but these include both benzyl chloride 2 [3] and benzyl bromide 4 [3], which are liquids at room temperature and the hindered benzyl chloride 3 recently reported by us [4]. Rather remarkably, of the 48 possible 2-, 3- or 4-halobenzyl halides (halogen = F, Cl, Br, I), compound 1 appears to be only the third to have its X-ray structure determined, the previous two being 4-bromobenzyl bromide 5 [5] and 2-iodobenzyl bromide 6 [6]. The key structural parameters for these are compared in Table 1, and it is clear that there is a good level of consistency between the structure of 1 and the previously reported structures.
In the unit cell of 1, there are four molecules, aligned as shown in Figure 3, with no significant intermolecular interactions. The early Zeeman quadrupole spectroscopy study was able to derive various structural parameters [2], but the one of most relevance here is the angle between the C–Cl bonds of different molecules in the crystal. The spectral quality was only good enough to evaluate this parameter for the ring C–Cl bonds, since the lower frequency signal associated with the CH2–Cl bonds was too weak. In addition, the author proposed a relative orientation that had two of the four molecules switched end for end compared to the arrangement shown in Figure 3, but did note this possibility which would not affect the key angles between C–Cl bonds in adjacent molecules.
The paper concludes that in the crystal the angle between ring C–Cl bonds in different molecules is either 67 ± 1° or 8 ± 1°. Taking the planes defined by C(2), C(1), C(6) and Cl(1) (Figure 1) for each of the four molecules in the unit cell, our structure (Figure 3) gives three different values for this angle: 69.4° and 68.5° for the larger angle and 9.75° for the smaller one, in remarkable agreement with those derived from the Zeeman spectra over 60 years ago.
In summary, we obtained the X-ray crystal structure of 4-chlorobenzyl chloride for the first time and found the molecule to have a fully planar chlorobenzene ring with the CH2Cl bond essentially orthogonal to it. Bond lengths and angles are consistent with the few previous structures of benzyl halides, and the alignment of the ring to Cl bonds in adjacent molecules in the unit cell is in remarkably good agreement with that predicted in an early Zeeman quadrupole spectroscopy study.

The following are available online, crystallographic data for 1 in cif format, check-cif file and molfile for 1.

A.M.Z.S. collected the X-ray data and solved the structure; R.A.A. designed the study, analysed the data and wrote the paper. All authors have read and agreed to the published version of the manuscript. 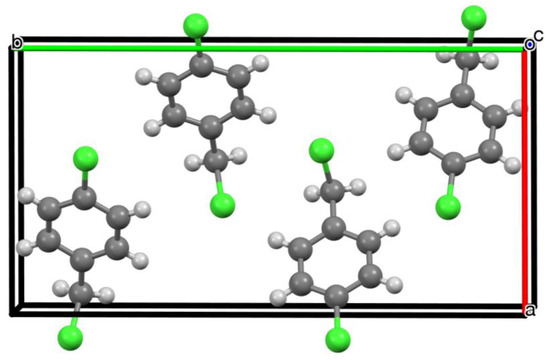 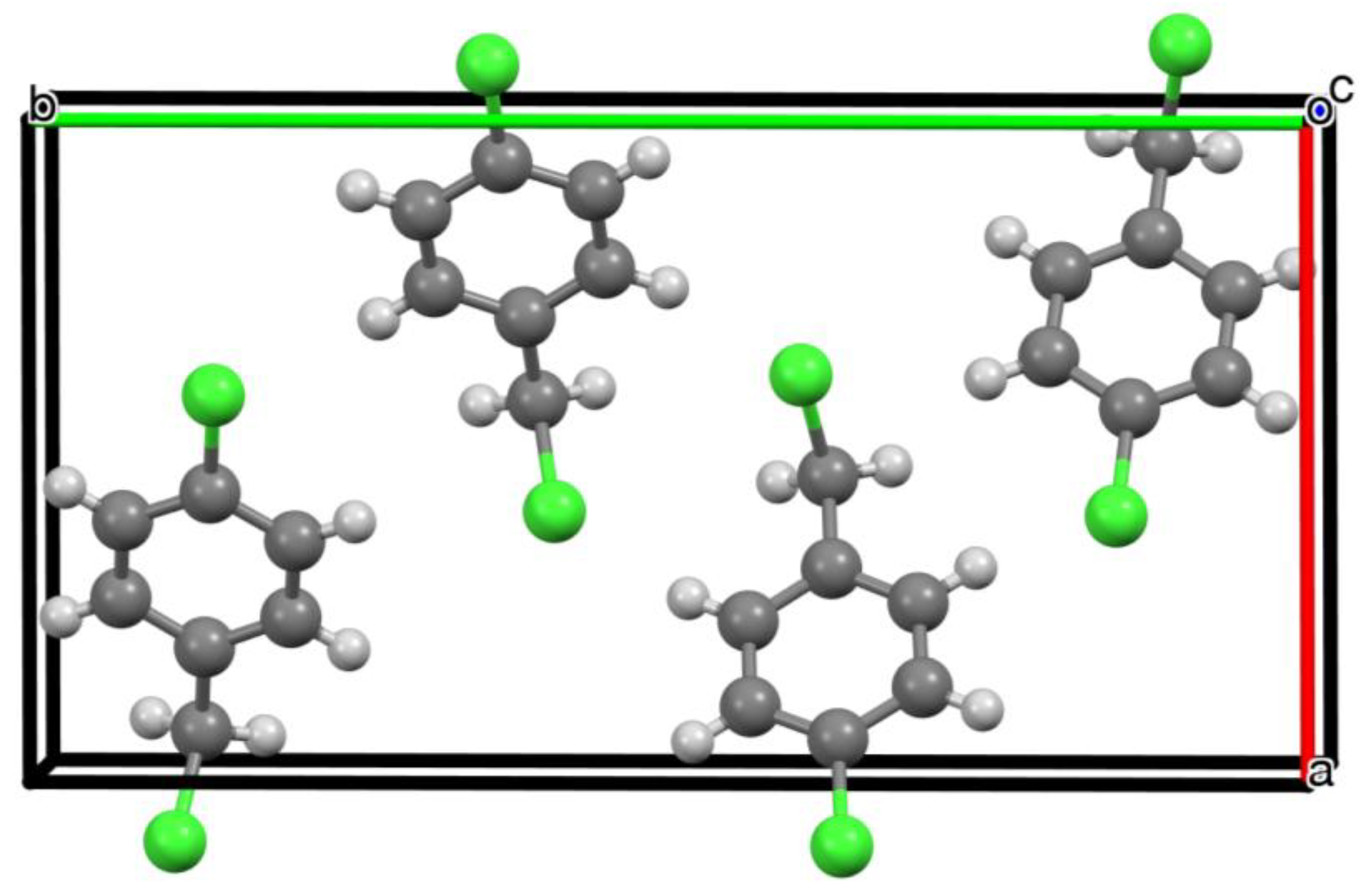