As opposed to adults, high-density lipoprotein (HDL) is the main cholesterol carrying lipoprotein in fetal circulation. The major HDL receptor, scavenger receptor class B type I (SR-BI), contributes to local cholesterol homeostasis. Arterial endothelial cells (ECA) from human placenta are enriched with cholesterol compared to venous endothelial cells (ECV). Moreover, umbilical venous and arterial plasma cholesterol levels differ markedly. We tested the hypothesis that the uptake of HDL-cholesteryl esters differs between ECA and ECV because of the differential expression of SR-BI. We aimed to identify the key regulators underlying these differences and the functional consequences. Immunohistochemistry was used for visualization of SR-BI in situ. ECA and ECV were isolated from the chorionic plate of human placenta and used for RT-qPCR, Western Blot, and HDL uptake assays with 3H- and 125I-labeled HDL. DNA was extracted for the methylation profiling of the SR-BI promoter. SR-BI regulation was studied by exposing ECA and ECV to differential oxygen concentrations or shear stress. Our results show elevated SR-BI expression and protein abundance in ECA compared to ECV in situ and in vitro. Immunohistochemistry demonstrated that SR-BI is mainly expressed on the apical side of placental endothelial cells in situ, allowing interaction with mature HDL circulating in the fetal blood. This was functionally linked to a higher increase of selective cholesterol ester uptake from fetal HDL in ECA than in ECV, and resulted in increased cholesterol availability in ECA. SR-BI expression on ECV tended to decrease with shear stress, which, together with heterogeneous immunostaining, suggests that SR-BI expression is locally regulated in the placental vasculature. In addition, hypomethylation of several CpG sites within the SR-BI promoter region might contribute to differential expression of SR-BI between chorionic arteries and veins. Therefore, SR-BI contributes to a local cholesterol homeostasis in ECA and ECV of the human feto-placental vasculature. View Full-Text
Keywords: human placenta; SR-BI; HDL; endothelium; arterial-venous difference human placenta; SR-BI; HDL; endothelium; arterial-venous difference
►▼ Show Figures 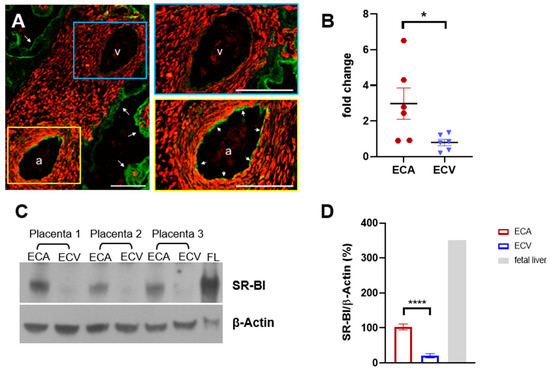