Epigenetic mechanisms are emerging key players for the regulation of brain function, synaptic activity, and the formation of neuronal engrams in health and disease. As one important epigenetic mechanism of transcriptional control, DNA methylation was reported to distinctively modulate synaptic activity in excitatory and inhibitory cortical neurons in mice. Since DNA methylation signatures are responsive to neuronal activity, DNA methylation seems to contribute to the neuron’s capacity to adapt to and integrate changing activity patterns, being crucial for the plasticity and functionality of neuronal circuits. Since most studies addressing the role of DNA methylation in the regulation of synaptic function were conducted in mice or murine neurons, we here asked whether this functional implication applies to human neurons as well. To this end, we performed calcium imaging in human induced pluripotent stem cell (iPSC)-derived excitatory cortical neurons forming synaptic contacts and neuronal networks in vitro. Treatment with DNMT1 siRNA that diminishs the expression of the DNA (cytosine-5)-methyltransferase 1 (DNMT1) was conducted to investigate the functional relevance of DNMT1 as one of the main enzymes executing DNA methylations in the context of neuronal activity modulation. We observed a lowered proportion of actively firing neurons upon DNMT1-knockdown in these iPSC-derived excitatory neurons, pointing to a correlation of DNMT1-activity and synaptic transmission. Thus, our experiments suggest that DNMT1 decreases synaptic activity of human glutamatergic neurons and underline the relevance of epigenetic regulation of synaptic function also in human excitatory neurons. View Full-Text
Keywords: DNMT1; human iPSC; layer 2/3 cortical neurons; synaptic activity; spontaneous activity; calcium imaging DNMT1; human iPSC; layer 2/3 cortical neurons; synaptic activity; spontaneous activity; calcium imaging
►▼ Show Figures 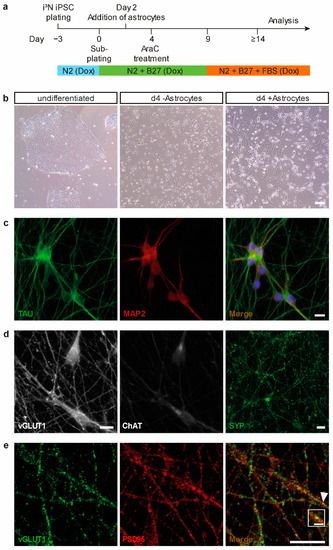