The interest in palladium(II) compounds as potential new anticancer drugs has increased in recent years, due to their high toxicity and acquired resistance to platinum(II)-derived agents, namely cisplatin. In fact, palladium complexes with biogenic polyamines (e.g., spermine, Pd2Spm) have been known to display favorable antineoplastic properties against distinct human breast cancer cell lines. This study describes the in vivo response of triple-negative breast cancer (TNBC) tumors to the Pd2Spm complex or to cisplatin (reference drug), compared to tumors in vehicle-treated mice. Both polar and lipophilic extracts of tumors, excised from a MDA-MB-231 cell-derived xenograft mouse model, were characterized through nuclear magnetic resonance (NMR) metabolomics. Interestingly, the results show that polar and lipophilic metabolomes clearly exhibit distinct responses for each drug, with polar metabolites showing a stronger impact of the Pd(II)-complex compared to cisplatin, whereas neither drug was observed to significantly affect tumor lipophilic metabolism. Compared to cisplatin, exposure to Pd2Spm triggered a higher number of, and more marked, variations in some amino acids, nucleotides and derivatives, membrane precursors (choline and phosphoethanolamine), dimethylamine, fumarate and guanidine acetate, a signature that may be relatable to the cytotoxicity and/or mechanism of action of the palladium complex. Putative explanatory biochemical hypotheses are advanced on the role of the new Pd2Spm complex in TNBC metabolism. View Full-Text
Keywords: platinum(II); palladium(II); spermine; cisplatin; human triple-negative breast cancer; xenografts; mice; NMR; metabolomics platinum(II); palladium(II); spermine; cisplatin; human triple-negative breast cancer; xenografts; mice; NMR; metabolomics
►▼ Show Figures 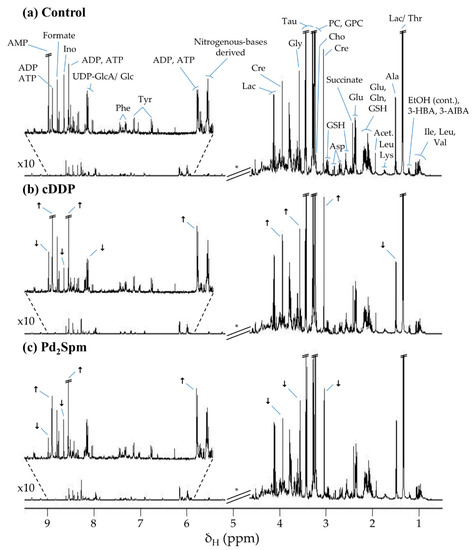