Identification of miR-199a-5p, miR-214-3p and miR-99b-5p as Fibrosis-Specific Extracellular Biomarkers and Promoters of HSC Activation
Next Article in Special Issue

Umbilical cord blood (UCB) has long been seen as a rich source of naïve cells with strong regenerative potential, likely mediated by paracrine signals. More recently, small extracellular vesicles (sEV), such as exosomes, have been shown to play essential roles in cell-to-cell communication, via the transport of numerous molecules, including small RNAs. Often explored for their potential as biomarkers, sEV are now known to have regenerative and immunomodulating characteristics, particularly if isolated from stem cell-rich tissues. In this study, we aim to characterize the immunomodulating properties of umbilical cord blood mononuclear cell-derived sEV (UCB-MNC-sEV) and explore their therapeutic potential for inflammatory skin diseases. UCB-MNC-sEV were shown to shift macrophages toward an anti-inflammatory phenotype, which in turn exert paracrine effects on fibroblasts, despite previous inflammatory stimuli. Additionally, the incubation of PBMC with UCB-MNC-sEV resulted in a reduction of total CD4+ and CD8+ T-cell proliferation and cytokine release, while specifically supporting the development of regulatory T-cells (Treg), by influencing FOXP3 expression. In a 3D model of psoriatic skin, UCB-MNC-sEV reduced the expression of inflammatory and psoriatic markers IL6, IL8, CXCL10, COX2, S100A7, and DEFB4. In vivo, UCB-MNC-sEV significantly prevented or reversed acanthosis in imiquimod-induced psoriasis, and tendentially increased the number of Treg in skin, without having an overall impact on disease burden. This work provides evidence for the anti-inflammatory and tolerogenic effect of UCB-MNC-sEV, which may be harnessed for the treatment of Th17-driven inflammatory skin diseases, such as psoriasis. View Full-Text
Keywords: extracellular vesicles; EV; umbilical cord blood; inflammatory skin disease; psoriasis extracellular vesicles; EV; umbilical cord blood; inflammatory skin disease; psoriasis
►▼ Show Figures 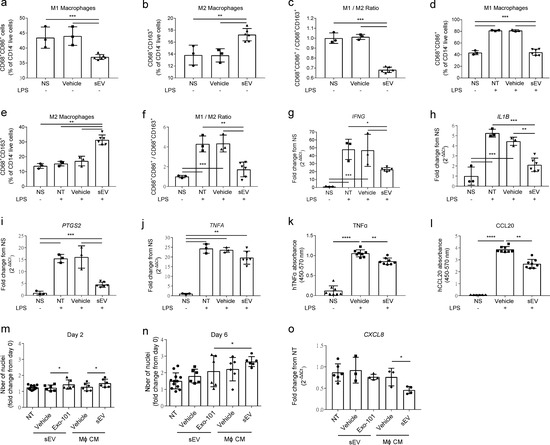