Noncoding RNAs have been known to contribute to a variety of fundamental life processes, such as development, metabolism, and circadian rhythms. However, much remains unrevealed in the huge noncoding RNA datasets, which require further bioinformatic analysis and experimental investigation—and in particular, the coding potential of lncRNAs and the functions of lncRNA-encoded peptides have not been comprehensively studied to date. Through integrating the time-course experimentation with state-of-the-art computational techniques, we studied tens of thousands of zebrafish lncRNAs from our own experiments and from a published study including time-series transcriptome analyses of the testis and the pineal gland. Rhythmicity analysis of these data revealed approximately 700 rhythmically expressed lncRNAs from the pineal gland and the testis, and their GO, COG, and KEGG pathway functions were analyzed. Comparative and conservative analyses determined 14 rhythmically expressed lncRNAs shared between both the pineal gland and the testis, and 15 pineal gland lncRNAs as well as 3 testis lncRNAs conserved among zebrafish, mice, and humans. Further, we computationally analyzed the conserved lncRNA-encoded peptides, and revealed three pineal gland and one testis lncRNA-encoded peptides conserved among these three species, which were further investigated for their three-dimensional (3D) structures and potential functions. Our computational findings provided novel annotations and regulatory mechanisms for hundreds of rhythmically expressed pineal gland and testis lncRNAs in zebrafish, and set the stage for their experimental studies in the near future. View Full-Text
Keywords: noncoding RNAs; lncRNAs; lncRNA-encoded peptides; circadian rhythmicity; zebrafish; bioinformatics noncoding RNAs; lncRNAs; lncRNA-encoded peptides; circadian rhythmicity; zebrafish; bioinformatics
►▼ Show Figures 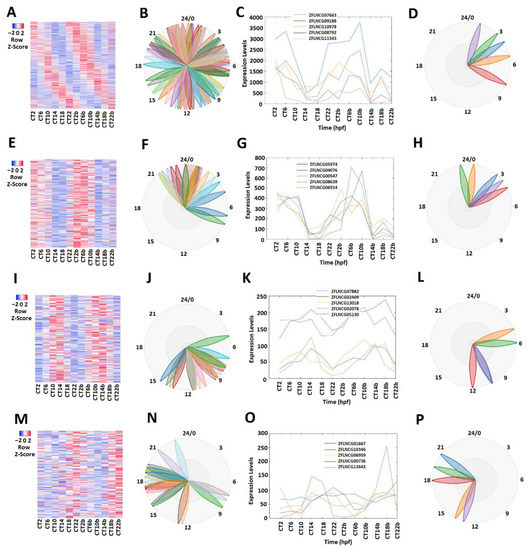