Inhibitory Effective Perturbations of Cilobradine (DK-AH269), A Blocker of HCN Channels, on the Amplitude and Gating of Both Hyperpolarization-Activated Cation and Delayed-Rectifier Potassium Currents
Previous Article in Journal

Lapatinib (LAP) and sorafenib (SOR) are multitargeted tyrosine kinase inhibitors (TKIs) with antineoplastic properties. In clinical observations, LAP and SOR may contribute to QTc prolongation, but the detailed mechanism for this has been largely unexplored. In this study, we investigated whether LAP and SOR affect the activities of membrane ion channels. Using a small animal model and primary cardiomyocytes, we studied the impact of LAP and SOR on Na+ and K+ currents. We found that LAP-induced QTc prolongation in mice was reversed by isoproterenol. LAP or SOR suppressed the amplitude of the slowly activating delayed-rectifier K+ current (IK(S)) in H9c2 cells in a time- and concentration-dependent fashion. The LAP-mediated inhibition of IK(S) was reversed by adding isoproterenol or meclofenamic acid, but not by adding diazoxide. The steady-state activation curve of IK(S) during exposure to LAP or SOR was shifted toward a less negative potential, with no change in the gating charge required to activate the current. LAP shortened the recovery from IK(S) deactivation. As rapid repetitive stimuli, the IK(S) amplitude decreased; however; the LAP-induced inhibition of IK(S) remained effective. LAP or SOR alone also suppressed inwardly rectifying K+ and voltage-gated Na+ current in neonatal rat ventricular myocytes. The inhibition of ionic currents during exposure to TKIs could be an important mechanism underlying changes in QTc intervals. View Full-Text
Keywords: Lapatinib; sorafenib; K+ current; action potential; cardiomyocytes Lapatinib; sorafenib; K+ current; action potential; cardiomyocytes
►▼ Show Figures 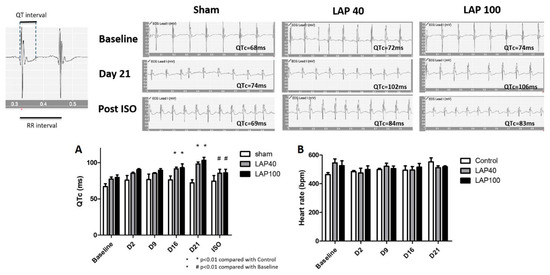