A Rice Immunophilin Homolog, OsFKBP12, Is a Negative Regulator of Both Biotic and Abiotic Stress Responses
Previous Article in Special Issue

Schizophrenia is a mental disorder that affects approximately 1–2% of the population and develops in early adulthood. The disease is characterized by positive, negative, and cognitive symptoms. A large percentage of patients with schizophrenia have a treatment-resistant disease, and the risk of developing adverse effects is high. Many researchers have attempted to introduce new antipsychotic drugs to the clinic, but most of these treatments failed, and the diversity of schizophrenic symptoms is one of the causes of disappointing results. The present review summarizes the results of our latest papers, showing that the simultaneous activation of two receptors with sub-effective doses of their ligands induces similar effects as the highest dose of each compound alone. The treatments were focused on inhibiting the increased glutamate release responsible for schizophrenia arousal, without interacting with dopamine (D2) receptors. Ligands activating metabotropic receptors for glutamate, GABAB or muscarinic receptors were used, and the compounds were administered in several different combinations. Some combinations reversed all schizophrenia-related deficits in animal models, but others were active only in select models of schizophrenia symptoms (i.e., cognitive or negative symptoms). View Full-Text
Keywords: schizophrenia; metabotropic glutamate receptors; muscarinic receptors; GABAB receptor schizophrenia; metabotropic glutamate receptors; muscarinic receptors; GABAB receptor
►▼ Show Figures 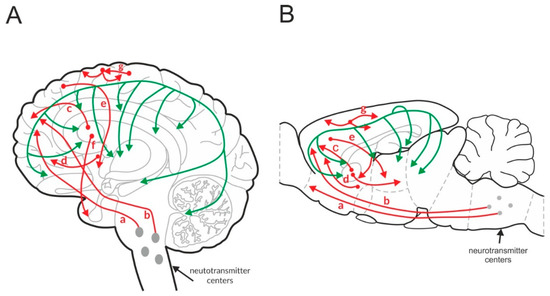