Sulforaphane Reduces Prostate Cancer Cell Growth and Proliferation In Vitro by Modulating the Cdk-Cyclin Axis and Expression of the CD44 Variants 4, 5, and 7

Prostate cancer patients whose tumors develop resistance to conventional treatment often turn to natural, plant-derived products, one of which is sulforaphane (SFN). This study was designed to determine whether anti-tumor properties of SFN, identified in other tumor entities, are also evident in cultivated DU145 and PC3 prostate cancer cells. The cells were incubated with SFN (1–20 µM) and tumor cell growth and proliferative activity were evaluated. Having found a considerable anti-growth, anti-proliferative, and anti-clonogenic influence of SFN on both prostate cancer cell lines, further investigation into possible mechanisms of action were performed by evaluating the cell cycle phases and cell-cycle-regulating proteins. SFN induced a cell cycle arrest at the S- and G2/M-phase in both DU145 and PC3 cells. Elevation of histone H3 and H4 acetylation was also evident in both cell lines following SFN exposure. However, alterations occurring in the Cdk-cyclin axis, modification of the p19 and p27 proteins and changes in CD44v4, v5, and v7 expression because of SFN exposure differed in the two cell lines. SFN, therefore, does exert anti-tumor properties on these two prostate cancer cell lines by histone acetylation and altering the intracellular signaling cascade, but not through the same molecular mechanisms. View Full-Text
Keywords: sulforaphane; prostate cancer; growth; proliferation; CD44 sulforaphane; prostate cancer; growth; proliferation; CD44
►▼ Show Figures 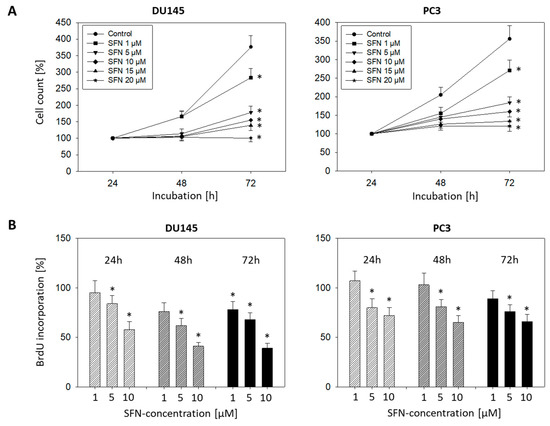