A Safe and Multitasking Antimicrobial Decapeptide: The Road from De Novo Design to Structural and Functional Characterization

Interleukin 33 (IL-33) is an IL-1 family cytokine that plays a central role in immune system by regulating and initiating inflammatory responses. The binding of IL-33 to the suppressor of tumorigenicity 2 (ST2) receptor induces mitogen-activated protein kinases (MAPK) and nuclear factor κB (NF-κB) pathways, thereby leading to inflammatory cytokines production in type 2 helper T cells and type 2 innate lymphoid cells. To develop an antibody specific to IL-33 with a defined epitope, we characterized a single-chain antibody variable fragments (scFvs) clone specific to IL-33, C2_2E12, which was selected from a human synthetic library of scFvs using phage display. Affinity (Kd) of C2_2E12 was determined to be 38 nM using enzyme-linked immunosorbent assay. C2_2E12 did not show cross-reactivity toward other interleukin cytokines, including closely related IL-1 family cytokines and unrelated proteins. Mutational scanning analysis revealed that the epitope of IL-33 consisted of residues 149–158 with key residues being L150 and K151 of IL-33. Structural modeling suggested that L150 and K151 residues are important for the interaction of IL-33 with C2_2E12, implicating that C2_2E12 could block the binding of ST2 to IL-33. Pull-down and in-cell assays supported that C2_2E12 can inhibit the IL-33/ST2 signaling axis. These results suggest that the scFv clone characterized here can function as a neutralizing antibody. View Full-Text
Keywords: interleukin 33; ST2 receptor; scFv; C2_2E12 interleukin 33; ST2 receptor; scFv; C2_2E12
►▼ Show Figures 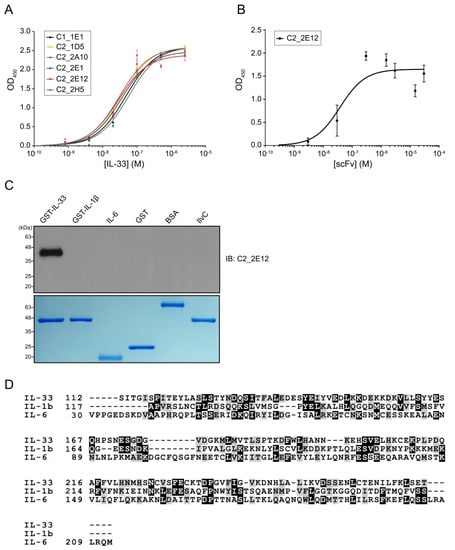