Life and Death of Fungal Transporters under the Challenge of Polarity

Eukaryotic plasma membrane (PM) transporters face critical challenges that are not widely present in prokaryotes. The two most important issues are proper subcellular traffic and targeting to the PM, and regulated endocytosis in response to physiological, developmental, or stress signals. Sorting of transporters from their site of synthesis, the endoplasmic reticulum (ER), to the PM has been long thought, but not formally shown, to occur via the conventional Golgi-dependent vesicular secretory pathway. Endocytosis of specific eukaryotic transporters has been studied more systematically and shown to involve ubiquitination, internalization, and sorting to early endosomes, followed by turnover in the multivesicular bodies (MVB)/lysosomes/vacuole system. In specific cases, internalized transporters have been shown to recycle back to the PM. However, the mechanisms of transporter forward trafficking and turnover have been overturned recently through systematic work in the model fungus Aspergillus nidulans. In this review, we present evidence that shows that transporter traffic to the PM takes place through Golgi bypass and transporter endocytosis operates via a mechanism that is distinct from that of recycling membrane cargoes essential for fungal growth. We discuss these findings in relation to adaptation to challenges imposed by cell polarity in fungi as well as in other eukaryotes and provide a rationale of why transporters and possibly other housekeeping membrane proteins ‘avoid’ routes of polar trafficking. View Full-Text
Keywords: traffic; endocytosis; sorting; Aspergillus nidulans; UapA; Golgi; fungi traffic; endocytosis; sorting; Aspergillus nidulans; UapA; Golgi; fungi
►▼ Show Figures 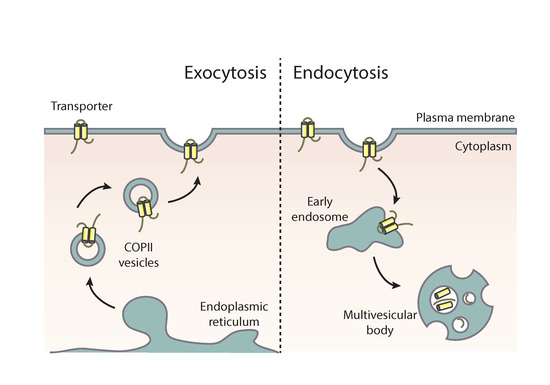