Food for Bone: Evidence for a Role for Delta-Tocotrienol in the Physiological Control of Osteoblast Migration
Previous Article in Special Issue

Identification and Characterization of the Lactating Mouse Mammary Gland Citrullinome

Peptidylarginine deiminases (PADs) are a family of calcium-regulated enzymes that are phylogenetically conserved and cause post-translational deimination/citrullination, contributing to protein moonlighting in health and disease. PADs are implicated in a range of inflammatory and autoimmune conditions, in the regulation of extracellular vesicle (EV) release, and their roles in infection and immunomodulation are known to some extent, including in viral infections. In the current study we describe putative roles for PADs in COVID-19, based on in silico analysis of BioProject transcriptome data (PRJNA615032 BioProject), including lung biopsies from healthy volunteers and SARS-CoV-2-infected patients, as well as SARS-CoV-2-infected, and mock human bronchial epithelial NHBE and adenocarcinoma alveolar basal epithelial A549 cell lines. In addition, BioProject Data PRJNA631753, analysing patients tissue biopsy data (n = 5), was utilised. We report a high individual variation observed for all PADI isozymes in the patients’ tissue biopsies, including lung, in response to SARS-CoV-2 infection, while PADI2 and PADI4 mRNA showed most variability in lung tissue specifically. The other tissues assessed were heart, kidney, marrow, bowel, jejunum, skin and fat, which all varied with respect to mRNA levels for the different PADI isozymes. In vitro lung epithelial and adenocarcinoma alveolar cell models revealed that PADI1, PADI2 and PADI4 mRNA levels were elevated, but PADI3 and PADI6 mRNA levels were reduced in SARS-CoV-2-infected NHBE cells. In A549 cells, PADI2 mRNA was elevated, PADI3 and PADI6 mRNA was downregulated, and no effect was observed on the PADI4 or PADI6 mRNA levels in infected cells, compared with control mock cells. Our findings indicate a link between PADI expression changes, including modulation of PADI2 and PADI4, particularly in lung tissue, in response to SARS-CoV-2 infection. PADI isozyme 1–6 expression in other organ biopsies also reveals putative links to COVID-19 symptoms, including vascular, cardiac and cutaneous responses, kidney injury and stroke. KEGG and GO pathway analysis furthermore identified links between PADs and inflammatory pathways, in particular between PAD4 and viral infections, as well as identifying links for PADs with a range of comorbidities. The analysis presented here highlights roles for PADs in-host responses to SARS-CoV-2, and their potential as therapeutic targets in COVID-19. View Full-Text
Keywords: SARS-CoV-2; COVID-19; peptidylarginine deiminases (PADs); protein deimination; extracellular vesicles (EVs); immunity; comorbidities; NETosis; anti-viral SARS-CoV-2; COVID-19; peptidylarginine deiminases (PADs); protein deimination; extracellular vesicles (EVs); immunity; comorbidities; NETosis; anti-viral
►▼ Show Figures 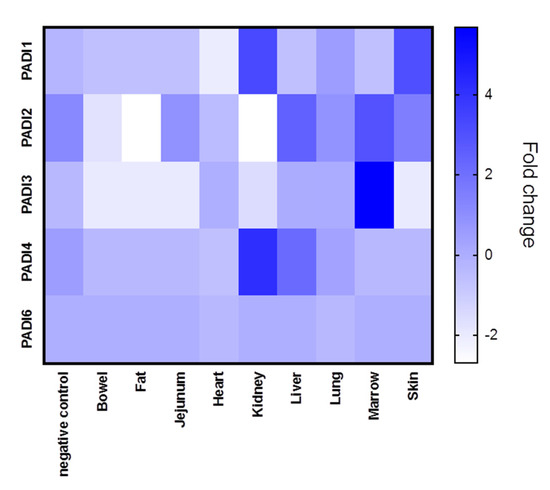