L-DOPA in Parkinson’s Disease: Looking at the “False” Neurotransmitters and Their Meaning
Previous Article in Journal

Pomegranate juice is a rich source of ellagitannins (ETs) believed to contribute to a wide range of pomegranate’s health benefits. While a lot of experimental studies have been devoted to Alzheimer disease and hypoxic-ischemic brain injury, our knowledge of pomegranate’s effects against Parkinson’s disease (PD) is very limited. It is suggested that its neuroprotective effects are mediated by ETs-derived metabolites—urolithins. In this study, we examined the capability of pomegranate juice for protection against PD in a rat model of parkinsonism induced by rotenone. To evaluate its efficiency, assessment of postural instability, visualization of neurodegeneration, determination of oxidative damage to lipids and α-synuclein level, as well as markers of antioxidant defense status, inflammation, and apoptosis, were performed in the midbrain. We also check the presence of plausible active pomegranate ETs-derived metabolite, urolithin A, in the plasma and brain. Our results indicated that pomegranate juice treatment provided neuroprotection as evidenced by the postural stability improvement, enhancement of neuronal survival, its protection against oxidative damage and α-synuclein aggregation, the increase in mitochondrial aldehyde dehydrogenase activity, and maintenance of antiapoptotic Bcl-xL protein at the control level. In addition, we have provided evidence for the distribution of urolithin A to the brain. View Full-Text
Keywords: urolithin A; ellagic acid; ellagitannins; pomegranate juice; rotenone; antioxidant enzymes; mitochondrial aldehyde dehydrogenase; neurodegeneration; apoptosis urolithin A; ellagic acid; ellagitannins; pomegranate juice; rotenone; antioxidant enzymes; mitochondrial aldehyde dehydrogenase; neurodegeneration; apoptosis
►▼ Show Figures 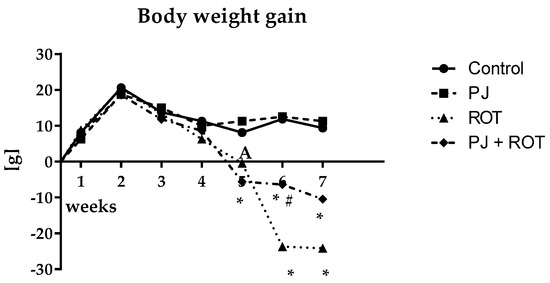