Genome-Wide Analysis and Hormone Regulation of Chitin Deacetylases in Silkworm

Chitin deacetylases (CDAs) are a group of enzymes involved in chitin metabolism in insects; they play a critical role in molting, pupation, and the modification of chitin. In this study, we identified several CDAs in the silkworm, Bombyx mori (BmCDA), and investigated the effect of various hormones on their expression in B. mori larvae and embryo cell lines (BmE). Eight genes encoding BmCDAs were identified in the silkworm genome. They showed different expression patterns in different tissues, and were classified into three types based on where they were expressed: the exoskeleton, digestive organs, and genital organs. Moreover, we found that some BmCDAs showed upregulated expression during the molting period, especially during the fourth molting period in larvae. We also verified that the expression of BmCDA1–6 was upregulated by treatment with 20-hydroxyecdysone not only in larvae, but also in BmE cells. Interestingly, juvenile hormone analog treatment also upregulated the expression of some BmCDAs. The overexpression of several transcription factors revealed that the POU transcription factor POUM2 may play a major role in the regulation of BmCDA expression. Finally, the silencing of BmCDA1 and BmCDA2 did not lead to abnormal phenotypes or death, but may have led to delays in silkworm pupation. These results provide important information about lepidopteran insects in terms of chitin deacetylases and the regulation of their expression. View Full-Text
Keywords: Bombyx mori; chitin deacetylases; 20-hydroxyecdysone; juvenile hormone; transcription factors Bombyx mori; chitin deacetylases; 20-hydroxyecdysone; juvenile hormone; transcription factors
►▼ Show Figures 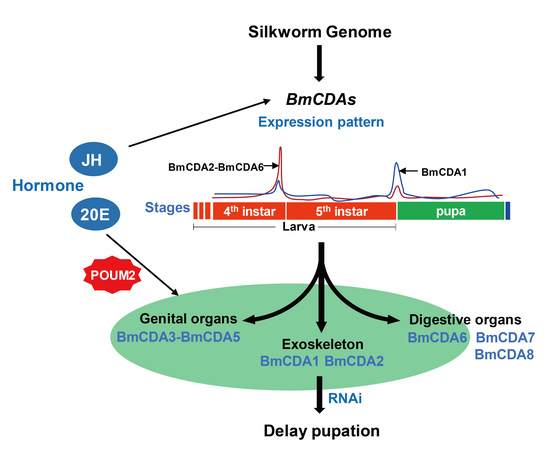