Jumping on the Bandwagon: A Review on the Versatile Applications of Gold Nanostructures in Prostate Cancer

Prostate cancer (PCa) is one of the most commonly diagnosed cancers worldwide, accounting for almost 1 in 5 new cancer diagnoses in the US alone. The current non-invasive biomarker prostate specific antigen (PSA) has lately been presented with many limitations, such as low specificity and often associated with over-diagnosis. The dysregulation of miRNAs in cancer has been widely reported and it has often been shown to be specific, sensitive and stable, suggesting miRNAs could be a potential specific biomarker for the disease. Previously, we identified four miRNAs that are significantly upregulated in plasma from PCa patients when compared to healthy controls: miR-98-5p, miR-152-3p, miR-326 and miR-4289. This panel showed high specificity and sensitivity in detecting PCa (area under the curve (AUC) = 0.88). To investigate the specificity of these miRNAs as biomarkers for PCa, we undertook an in depth analysis on these miRNAs in cancer from the existing literature and data. Additionally, we explored their prognostic value found in the literature when available. Most studies showed these miRNAs are downregulated in cancer and this is often associated with cancer progression and poorer overall survival rate. These results suggest our four miRNA signatures could potentially become a specific PCa diagnostic tool of which prognostic potential should also be explored. View Full-Text
Keywords: miRNAs; biomarker; prostate cancer; diagnosis; prognosis miRNAs; biomarker; prostate cancer; diagnosis; prognosis
►▼ Show Figures 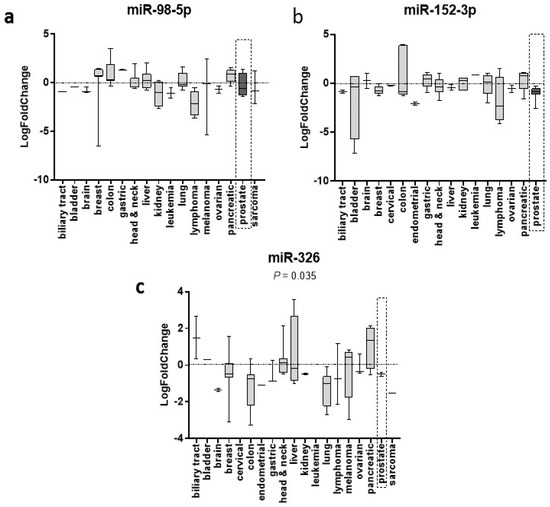