Four Major Channels Detected in the Cytochrome P450 3A4: A Step toward Understanding Its Multispecificity
Next Article in Special Issue

AGPase catalyzes a key rate-limiting step that converts ATP and Glc-1-p into ADP-glucose and diphosphate in maize starch biosynthesis. Previous studies suggest that AGPase is modulated by redox, thermal and allosteric regulation. However, the phosphorylation of AGPase is unclear in the kernel starch biosynthesis process. Phos-tagTM technology is a novel method using phos-tagTM agarose beads for separation, purification, and detection of phosphorylated proteins. Here we identified phos-tagTM agarose binding proteins from maize endosperm. Results showed a total of 1733 proteins identified from 10,678 distinct peptides. Interestingly, a total of 21 unique peptides for AGPase sub-unit Brittle-2 (Bt2) were identified. Bt2 was demonstrated by immunoblot when enriched maize endosperm protein with phos-tagTM agarose was in different pollination stages. In contrast, Bt2 would lose binding to phos-tagTM when samples were treated with alkaline phosphatase (ALP). Furthermore, Bt2 could be detected by Pro-Q diamond staining specifically for phosphorylated protein. We further identified the phosphorylation sites of Bt2 at Ser10, Thr451, and Thr462 by iTRAQ. In addition, dephosphorylation of Bt2 decreased the activity of AGPase in the native gel assay through ALP treatment. Taking together, these results strongly suggest that the phosphorylation of AGPase may be a new model to regulate AGPase activity in the starch biosynthesis process. View Full-Text
Keywords: maize; AGPase; phosphorylation; brittle-2; phos-tagTM maize; AGPase; phosphorylation; brittle-2; phos-tagTM
►▼ Show Figures 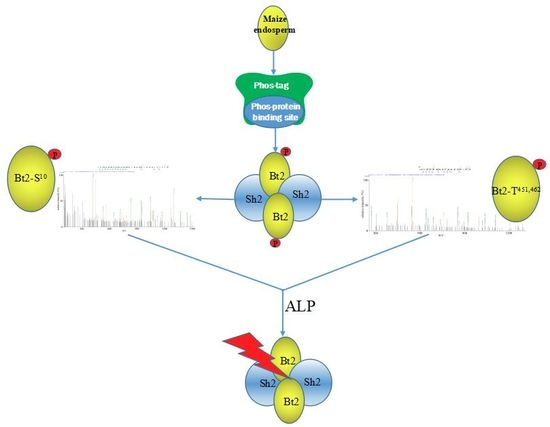